ONNA Youth Stakeholders had a strategic meeting yesterday 25th February , 2018 at Ndon Eyo at the instance of the number one youth of Akwa Ibom State, Comrade Daniel Emem Daniel.

Comrade Daniel Daniel in his welcome address informed the youth stakeholders of the need for a Non Violent 2019 election, which according to him is the youths option for 2019 elections.

He called for unity as the youths mobilise massively for his Excellency Deacon Udom Emmanuel and other PDP candidates. 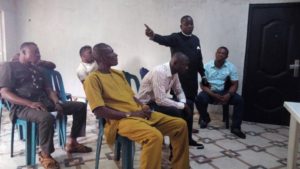 Comrade Daniel intimated the youth stakeholders of his intention to kick start a Door-to-Door Campaign on Federal Constituency basis on the need for a violence free elections in 2019. He opined that “since the youths have been sensitized and mobilized for the continuous voters registration exercise there is no point carrying weapons as the PVC is the only legitimate weapon to be deployed” He further extolled the superlative performance of his Excellency Deacon Udom Emmanuel in areas not limited to Industrialisation, Roads Construction, Job Creation and Comprehensive Sports Development even as the entire Youth Stakeholders pledged their unalloyed loyalty and support for his Excellency and unanimously adopted him as their Governor till 2023. 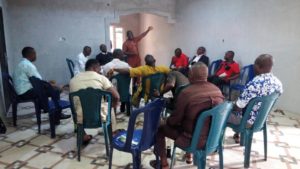 The closing prayer was anchored by Prophet Christopher Akpan James which was preceded by a superb entertainment by the National Youth Council Chairman of Akwa Ibom State.