THE PDP LEADERSHIP IN UBIUM NORTH
ON BARR. OTOBONG EFFIONG BOB WE STAND

We, members of the PDP Leadership in Ubium North in Nsit Ubuim L.G.A, wish to state that having perfected the political arrangement of zoning of political offices in our area – both elective and appointive – in doing so, the Caucus recognized three political zones in Nsit Ubium Local Government Area to include; Nsit, Ubium North and Ubium South. We do not wish to go back to those dark days of rancorous politicking and the marginalization of any areas. It was in recognition of this arrangement that (a) the serving commissioner in the current administration was zoned to Ubium South. (b) The sitting House of Assembly member until 2019 is from Nsit axis.
In addition, when the tenure of the chapter officers of the PDP expired and a new one was to be put in place, the chapter Chairmanship slot was zoned to Ubium South while the chapter secretary position went to Nsit. That is still the position now. 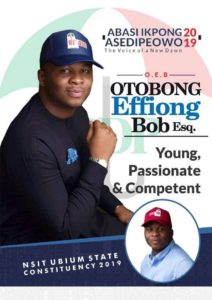 Having taken cognizance of the above scenario, the PDP Caucus in Nsit Ubium at its meeting in August, 2017 and in preparation for the December 9, 2017 local government elections, zoned the political offices due to Nsit Ubium as follows:
Chairmanship – Nsit
Vice Chairmanship – Ubium South
House of Assembly seat come 2019 – Ubium North
After the local government elections, we therefore set about looking for whom Ubium North will present to Nsit Ubium PDP Caucus for ratification.
The immediate past transition committee Chairman for Nsit Ubium, Mr Otobong Edemidiong, who is from Ubium North, called together the three PDP ward Chairmen and the PDP chapter officers from the area to work out modalities for the selection. 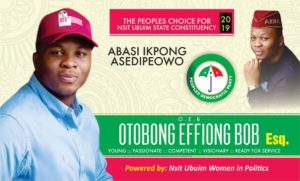 >
The delegation called on Senator Effiong Bob to seek his advice. His advice was that the body should look for a person with quality and character, and that will be acceptable to the other zones in Nsit Ubium.
The transition committee Chairman at the time, Mr. Otobong Edemidiong, the ward Chairmen and the chapter officers from the zone left and expanded the group to include ten party elders from each of the three wards and began the search. At the end of their search, they went back to Senator Effiong Bob and told him that they had found Barr. Otobong Effiong Bob to be worthy of the seat. Senator Bob, who was stunned, said NO, that his son was comfortable where he was and asked them to go and think again and to examine other variables and options.
The group, superintended over by the then transition committee Chairman, was further expanded by including leaders of thought from Ubium North, as well as supervisors of the transition committee at the time and went back to Senator Bob and told him that they still stood by their previous decision that the cap fitted Barr. Otobong Effiong Bob. They said the same thing, not once, not twice but four times. It was during the fourth session that Senator Effiong Bob told them that since it was his son that they wanted, he would contact the son and sound his opinion. This he did.
RATIONALE BEHIND THE CHOICE
The rationale behind the choice of Barr. Otobong Effiong Bob as expressed by the immediate past transition committee chairman for Nsit Ubium, Mr. Otobong Edemidiong, who was the leader of the group, were as follows:
Good educational attainment
A lawyer by profession and therefore capable of articulating the position of Nsit Ubium well in all matters at the House of Assembly if elected.

Being a son of Senator Effiong Bob, who as pointed out by the leader of the group, had done so much for Nsit Ubium. He mentioned the zoning of political offices in Nsit Ubium which has brought about harmonious co-existence in the area, less expensive electoral processes and zero marginalization of one zone or the other and stated that it was proper to reward Senator Effiong Bob by asking that he released his son to step into the political arena and get sponsored by the PDP to be elected into the state House of Assembly come 2019.
Considering that the immediate past transition committee chairmanship position was held by an Ubium North Ward 1 person for two and a half years,
And

Although Senator Effiong Bob did not accede at the first, second and third instances, when the group was expanded to include ten PDP elders from the three wards and other leaders of thought he promised to inform the son of the request of Ubium North people and to ask of opinion. When Barr. Otobong Effiong Bob appeared before a delegation of Ubium North people, he accepted the call to duty.

OUR RESOLUTION
It should be noted that Senator Effiong Bob had earlier consented to the aspiration of Barr. Victor Bob who had first sought his blessing to contest the House of Assembly seat for Nsit Ubium State Constituency come 2019.
However, Mr. Otobong Edemidiong led a small group of people who visited Senator Bob and mounted a campaign of calumny and blackmail against Barr. Victor Bob to the effect that he was not acceptable to the people of Nsit and Ubium South.
As things unfold today, that small group had sinister motives.
We, the leaders of Ubium North cannot sit by and allow such sinister objectives to prosper. We condemn the action of that group in its totality.
2. Ubium North people are not known to speak from both sides of their mouths, consequently, we stand by the decision we collectively took in front of Barr. Otobong Effiong Bob and the father, Senator Effiong Bob to present him (Barr. Otobong Effiong Bob) for election into the Akwa Ibom State House of Assembly come 2019.
3. That it would have amounted to a colossal ingratitude to have pressurized Senator Bob to bring forth his son and at the last minute to turn our back on him.
4. That those who are now clamouring for a change of position even though they were part and principal actors in the decision and choice processes, may have a selfish consideration and we dissociate ourselves from such huge betrayal
5. That Barr. Otobong Effiong Bob was having a flourishing carrier and that it would amount to sheer wickedness on our part to pull him out and abandon him thereafter
6. That we will not want to stand and watch our political leader being maligned and vilified by a group of self-seeking individuals
7. That we shall continue to stand by him in his efforts to reposition our people and the community as a whole.
8.That we stand by our adoption of Barr. Otobong Effiong Bob on Wednesday December 27, 2017 as the person to be presented to the PDP Caucus in Nsit Ubium for election into the House of Assembly to represent Nsit Ubium State constituency come 2019. That, indeed, is our collective stand.

Be the first to comment on "UBIUM NORTH REAFFIRMED THEIR SUPPORT TO BARR OTOBONG EFFIONG BOB, SAYS NO TURNING BACK."