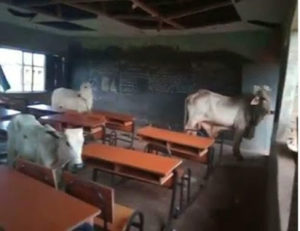 It was gathered that teachers and pupils of the school escaped death and injuries by the whiskers on Wednesday, June 7th, following the invasion of the rampaging cows. 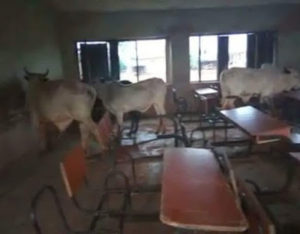 The cows were said to have sacked the entire school, as they invaded various classrooms and disrupted academic activities. The teachers and pupils had to jump through the windows to escape being trampled to death. 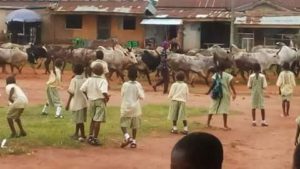 The incident was reported to the State Ministry of Education, which immediately moved into action to evacuate the cows from the school to enable normal academic activities to continue.
More photos below…

Be the first to comment on "THE CATTLE INVASION HAPPENED AT A PRIMARY SCHOOL IN EDO AND IT WAS SO SCARY THAT PUPILS, TEACHERS JUMPED THROUGH WINDOWS TO ESCAPE DEATH"