Protest erupted today Wed, 19 July 2017 in Aka Itiam as youths made up of 3 villages of Itiam Etoi, Edem Akai and Itiam Ikot Ebia turn out in numbers with placards sadly expressing their anger in the fraudulent manner the village head is handling matters affecting the village.

Investigations by Nextreporter Crew revealed that the village head, Chief Effiong Asikpo of Itiam Etoi was accused of embezzling funds meant for the development and construction of roads in the community. 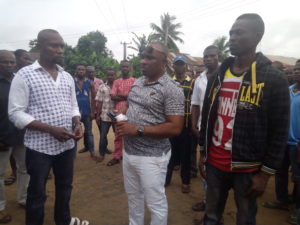 Some of the issues leveled against the Etteidung Effiong Asikpo are listed below….

*Misappropriation and embezzlement of the compensation funds from Tropicana for the exchange of their Land the government took.

*the compensation monies in exchange for the Nsima Ekere campaign ground 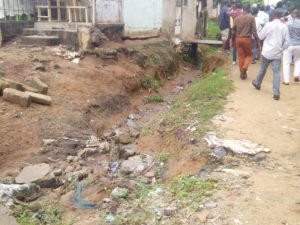 The youths also complained that Etteidung Asikpo only runs the village affairs only with his Secretary who happens to be his family member from his house neglecting the village Council Hall which was meant for village meetings. 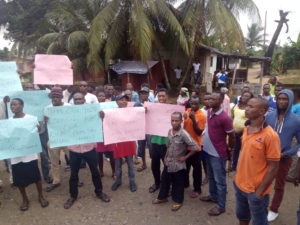 While trying to calm the youths, the Youth Leaders of Itiam Etoi, Itiam Ikot Ebia, and Edem Akai…. Abai (Amb) Ukai Udeme Emmanuel, Comrade Andikan Ekpeyong Oyong and Comrade Ifure Edet Ekpe respectively pleaded with the youths to continue to maintained peace as law abiding citizens as the matter will be channel to appropriate quarters.

As at the time of the news, all efforts to contact the village head and his Secretary were not yielded positive result.