The Commissioner for Information and Strategy, Mr Charles Udoh has called for collaboration with media houses in order to educate Akwa Ibom people on how to take advantage of opportunities in the ongoing industrialization projects of Governor Udom Emmanuel.

The Commissioner made the call while addressing Information Officers and other staff of the ministry during the 2nd quarter 2017 Best Information Officer award ceremony held at the NUJ Press Centre, Uyo on Thursday, October 26, 2017. 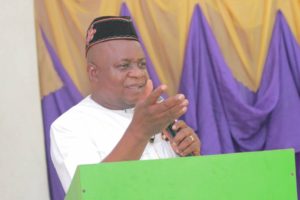 Mr Udoh stated that it was important for Akwa Ibom people to start now to strategize on how to be actively involved as vendors or distributors and play related roles in the operations of the emerging industries in the state with a view to enhancing their economic power.

He said the philosophy of depending on other people for handouts as means of survival must be kicked out of the state in line with the Dakkada Spirit.

He explained that in a clear determination to build a sustainable bright future for Akwa Ibom, Governor Udom Emmanuel has provided a conducive environment for a private sector driven economy instead of the hitherto predominantly government driven economy. 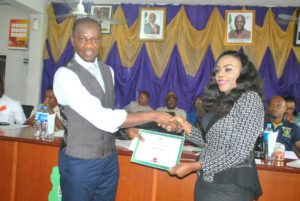 The Commissioner told the staff of the ministry that the interest of Udom’s administration in Industrialization is to also reduce dependency on oil as major revenue earner for the state.

Mr Udoh noted that the Electric Metering and Metering Box Manufacturing Factory, the Syringe Factory and others were brought to bear by the State Government due to the prospect of high revenue because of the vast and virgin market opportunities for the finished goods.

He charged the Information Officers to brace up to take the news of Government’s effort at developing the state and the advantages thereof to all nooks and crannies of Akwa Ibom.

According to the Commissioner, “For us to achieve that dream of turning Akwa Ibom into an industrial hub of Nigeria, into the preferred tourist destination in Nigeria, all of us have a major role to play”. 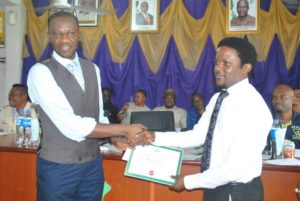 He spoke on the need for people to be willing to sacrifice some things if they want to succeed and achieve anything in life stressing that champions undergo a lot of training before they emerge as such.

The Commissioner however acknowledged challenges faced by Information Officers in the discharge of their assignments but encouraged them to continue to do their best and assured them of improvement.

Mr Udoh congratulated those who won awards during the event and charged them to sustain the tempo while encouraging those who could not make it to take it as a challenge and work harder to emerge victorious in subsequent award ceremonies.

The Information Boss applauded the Permanent Secretary, Pastor Praise Okon, Directors and Staff of the ministry for the support he enjoyed and expressed the hope that they would achieve greater things together.

Also speaking, the Permanent Secretary, Pastor Praise Okon, commended the Commissioner for initiating the reward system and keeping to his earlier promise of making it a routine event.

Pastor Okon applauded the Commissioner for making the ministry proud since assumption of office explaining that the award ceremony gives hope and confidence to every staff.

He said the quarterly award ceremony should also be a source of inspiration to staff of the ministry knowing that everyone has a responsibility to stand up to be counted when excellence, commitment and dedication to duty is considered.

The Permanent Secretary charged everyone who received award to see it as a challenge to do better in the years ahead while those who could not win should aspire to do so in the future.

In the same vein, the State Chairman of NUJ, Elder Patrick Albert eulogized the Commissioner on his efforts and promised that the union will partner the State Government in development programmes, noting that Akwa Ibom projects belong to every Akwa Ibom person.

He expressed the hope that the Commissioner would extend the reward mechanism to other state’s information outfits and by extension the NUJ.

In a vote of thanks, the Winner of the Best Information Officer, Akwa Ibom State Government House/Legislative Category in the Second Quarter of 2017, Ndifreke P. Akpan, who spoke on behalf of other award winners, appreciated God for the success.

She promised to continue to contribute her quota to the success of the Ministry and thanked the Commissioner for approving the hosting of the Ceremony and the Permanent Secretary as well as the Directors for their efforts in making the event a huge success.