Akwa Ibom State Government says it will continue to look into the welfare of Royal Fathers in the state with a view to improving upon it from time to time.

He described the Traditional Institution as a vital layer through which the state government takes governance closer to the people and applauded the Paramount Ruler for initiating a futuristic welfare package of One Million Naira for families of any deceased Clan Head in the area.

The Governor promised to visit the agricultural project when it gets to 60% and saluted the Paramount Ruler of Onna for his plans to generate employment for the people and assured of encouragement by government on most of the ideas created by the Royal Father.

He described Edidem Raymond Inyang as a detribalized man to work with and assured the Paramount Rulers and Clan Heads that the state has a very strong Ministry of Local Government and Chieftaincy Affairs that will continue to work with them for their well-being and that of Akwa Ibom.

The Governor who also spoke on the need for unity said, “it is good to actually unite ourselves together, once we can do that, you see we will be stronger” adding that “Government needs Paramount Rulers in your mold who do not think only about themselves but the community”.

Governor Emmanuel expressed optimism that given the Paramount Ruler’s certification, professional accomplishment and exposure, he will raise the bar of representation and make the people proud.

The State Chief Executive congratulated the Paramount Ruler on his Coronation and appreciated guests for attending the event and the planning committee for a colorful ceremony.

Speaking earlier, the Chairman on the Occasion who is the Paramount Ruler of Eket, Edidem E. C. D. Abia said that his Onna counterpart, Edidem Raymond Inyang, as a Chattered Accountant and Technocrat, is well vest in governance and really fit to succeed the Late Eminent Paramount Ruler, Dr Akpabio Udo Ukpa who joined his ancestors.

He said Nigeria, under the current situation, requires Paramount Rulers who are well educated and well informed and noted that Onna Local Government Area is fortunate to have a Royal Father in that category.

The celebration climaxed with the Coronation of the Paramount Ruler of Onna, Edidem Raymond T. Inyang, led by his Ibiono Ibom counterpart, Okuku Dr Ime Usoro Inyang and others.

In his inaugural speech, the Paramount Ruler of Onna, Edidem Raymond T. Inyang thanked God for making the event possible and pledged to do more for the unity, peaceful coexistence, prosperity, growth and development of Onna Local Government Area in particular and Akwa Ibom State as a whole.

The Paramount Ruler promised to work for unity and peace among the Monarchs to ensure oneness of purpose for benefits of the grassroots and expressed commitment to a gradual transformation of the village adjudication system which the pilot process had started within the Awa Afaha Clan Council in conjunction with the Akwa Ibom State Multi-door Court House.

He paid tribute to his predecessors and promised to learn from their errors and improve on their successes and thanked the Governor for his efforts at developing the state, his lieutenants and others for the show of love during the Coronation.

The Coronation Ceremony also featured presentation of awards to some personalities and appreciation of the Paramount Ruler by Awa Afaha Clan Council. 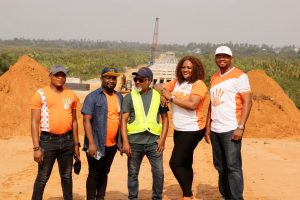 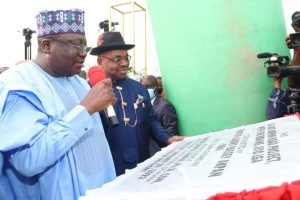