The Hon Commissioner for Housing and Special Duties Mr. Akan Okon in a media tour/chat with the online media influencers revealed an impressive and superlative performance in infrastructure revolution of His Excellency, Mr Udom Emmanuel in Akwa Ibom State.

While Mr. Akan Okon took the online Media influencers around the Idongesit Nkanga Secretariat, we notice that Governor Udom has constructed another internal access roads and parking lots in the Secretariat and this has lit smiles in the faces of Civil servants in the secretariat. The State Youth Wing Labour Leader, Comrade Joseph John who spoke on behalf of the civil servants expressed joy and satisfaction in Governor Udom Emmanuel’s prompt attention to the plight of civil servants noting that several administrations have come and gone without alleviating their suffering. 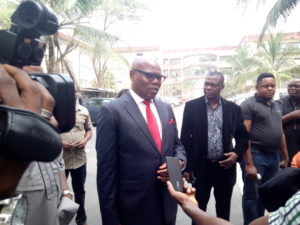 During the tour, we also observed that the ongoing projects at the Ibom International Airport like the second run way is at 70% completion and other projects like the Sub Power station to boost electricity supply at the Airport is at the commission level. Other projects undertaken by the Ministry will be covered.

Mr Akan Okon also clears the air on the Ibom Industrial Deep Sea Port stating that work will soon commence at the site as the Akwa Ibom State Government has already gotten an approval for the Procurement procedures of the implementation of Ibom Sea Port.

“In health, Gov Udom Emmanuel has performed well, he started with Anua hospital, to Etinan General Hospital, even the federal hospital, he has given them support”.

On why the Four Point Hotel in Ikot Ekpene has been delayed in opening, the Commissioner explained that with the recent acquisition of the Hotel by Marriot group from the Starwood group who was the initial managers of the Four Points Hotel, the new managers will need some time to access the books for record purposes before taking off of the hotel. “Once the new mangers of the hotel are done with book keeping & House Keeping, the hotel will take off.”

“Governor Udom Emmanuel during his election campaign promises to industrialise the state and today there are industries everywhere” – Akan Okon concluded.

Join the conversation on social media via the hashtags