“Analysis of official data published by the National Bureau of Statistics (NBS) revealed that in 2016, the 30 states reviewed, minus Lagos, generated N515.61 billion internal revenue which is one-third of the N1.479 trillion they spend on workers remuneration annually. This remuneration covers the salaries, pensions and gratuities of workers in the states and local government areas. The precarious financial state of the states has made it very difficult for them to pay workers’ salaries, let alone executing any capital projects”, a report on Daily Trust Newspapers revealed. The report further indicated that Akwa Ibom with about 50,000 workers, ranked among states with the highest workforce and a wage bill of N57.6bn in the year under review. N57.6bn is almost half of the total N116.6bn the state received from the federation account in 2016. “But the situation worsened with the dwindling oil revenues as more than two-thirds of the states can’t pay workers’ salaries even with the federally-accrued revenue shared to them every month. The situation remained unchanged even after a majority of them resorted to securing loans, apart from their IGR, federal allocation, as well as the tranches of bailout approved for them by President Muhammadu Buhari”, the report added.

As a core civil service state, the success of almost all sectors of the state largely depends on the effectiveness and efficiency of the bureaucracy. Of course, quality manpower is the cornerstone of the Service. But, beyond just working to keep the civil service up and running, civil servants directly influence every sector of the state’s economy. That is why traders in the markets, meat sellers at abattoirs, even food vendors on streets are always asking if the government has paid salary. Would you be surprised if you discover that most women in the rural communities who have built their entire life around their farms are also caught up in this “end of the month” frenzy? Definitely No. That’s already an open secret. Even the big enterprises like banks whose daily turnovers run into millions also have keen interest in the meager monthly salaries from the government. Civil servants are the major fallbacks for at least over 95 percent of unemployed graduates and youths in the state. Anyone that has lived under the same roof with a civil servant, will understand that they are the only set of workers with a long list of creditors who all expect their debts at the same time; end of month. So, if the state government fails to pay salaries on time, it’s not only starving the workers, but also stifling thousands of businesses in the state. 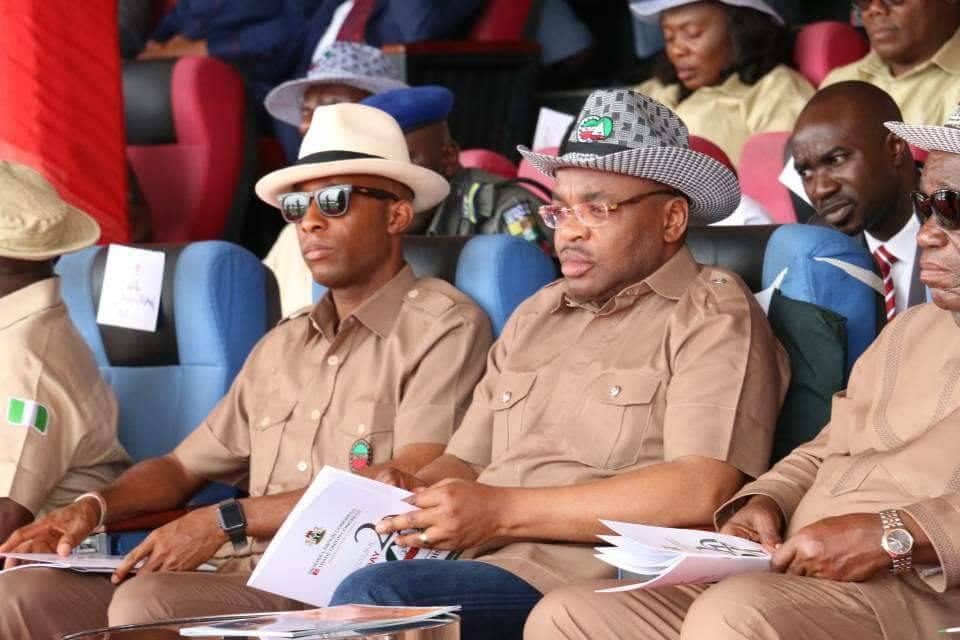 According to records, payment of salaries gulped almost half of the state’s allocation in 2016. This is 2018; the workforce has significantly increased and the overall population of the state has equally grown but the resources are even shrinking. A quarterly review by Nigeria Extractive Industries Transparency Initiative (NEITI) released in March 2017, showed a steady decline in federal allocations. “The Federation Accounts Allocation Committee (FAAC) disbursed N5.12 trillion to the three tiers of government in 2016 as against the N6.01 Trillion shared in 2015. The figure is 15% short of disbursements in 2015 alone and over 40% less than the aggregated disbursements to the three tiers of government in Nigeria between 2013 and 2016”, the NEITI report revealed. The report, which further showed that revenues accruing to the state governments fell short of their budgets projections, added, “The Federal Government received N3.711 trillion in 2013 and this fell by 43.9% to N2.08 trillion in 2016. Similarly, disbursements to State Governments totaled N3.095 trillion in 2013. In 2016, States received N1.642 trillion, which represented a 46.9% decline on the 2013 figures.

Because the state government cannot downsize its workforce in the face of the dwindling economy, it has to prioritize its needs. Akwa Ibom people may not fully appreciate Governor Udom Emmanuel’s decision to prioritize payment of workers’ salaries until the we know the level of ruins and sufferings in other states where the government are unable pay salaries on time. In October last year, a senior civil servant in Kogi State, Edward Soje committed suicide after his wife gave birth to triplets. According to reports, Soje decided to take his own life out of frustrations. “Soje, who hailed from the Ogori /Magongo Local Government Area of Kogi State , was a Grade Level 16 Officer in the State Teaching Service Commission and was owed 11 months’ salary arrears as of the time he took his life” reports the Punch. In a related incident, the social media was shocked in October 2017 with a viral video of a Kogi worker weeping over the loss of his child due to his ability to secure the child’s hospital bill. “In the video, the man who lamented his inability to pay his daughter’s hospital bills due to the fact that he is being owed a backlog of salaries for the past 10 months, is seen crying profusely following the death of his child”, reports Pulse.ng.

In December 2018, another suicide case was recorded in Kogi state. According to the report, a 47 year-old Abdullahi Uye Zhiya, a Chief Store Keeper with the Kogi State Universal Basic Education Board, from Oguma in Bassa Local Government, killed himself by intentionally drinking a dose of substance suspected to be poisonous chemical. Metro News reports, “He was said to have taken poisonous substance after complaining bitterly to a friend over his inability to feed his family. Four of his children have reportedly dropped out of school due to his inability to pay their fees. He was also said to have a health challenge which worsened as he could not attend to it”, adding that the deceased, who was affected by the screening exercise in the state, was owed salaries for over 12 months. The situation in Kogi state became very alarming that the Kogi state Chairman of the NLC, Mr Onu Edoka publicly appealed to workers in the state not to see suicide as a way out of the hardship imposed on them as a result of non-payment of their salaries. Moved by the sufferings of workers in Kogi state, in October 2017, the Senator representing Kogi West in the Senate, Dino Melaye knelt down on the floor of the Senate during live plenary and begged his colleagues to intervene in the situation. In response, about 40 senators donated 1,260 bags of rice to Kogi workers. As noble as the gesture seemed, the event in the red chamber was a huge shame on the government and people of Kogi State.

It is therefore hypocritical for people (who are either directly or indirectly surviving by the state civil service) to admit that the most important responsibility of a government is to ensure the welfare of her citizens, then turnaround to claim that the timely payments of workers’ salaries by Akwa Ibom government is not an achievement worth commending. The workers have other entitlements like promotion arrears, leave grants while retired ones are entitled to pensions and gratuities. These demands are also top of the state government’s “must do” list as Governor Udom Emmanuel is ensuring the continuous clearing of gratuity backlogs. It can be recalled that shortly after assuming office in 2015, the governor cleared the backlog of retired civil servants’ gratuities dating between 2000 and 2011, a move which earned him commendation from the state leadership of the Nigerian Labour Congress (NLC), as a worker-friendly governor. In 2017, the governor, approved another batch of payment of backlog of arrears of pension and gratuities to retired civil servants in the state. The state government had commenced another pensioners’ verification exercise on Monday, 16th April, 2018. The information was contained in a release signed by The Head of Department Inspectorate, Office of the Accountant General, Mr. Edim Uwatt on behalf of the Accountant General.

This exercise is in furtherance of Governor Udom’s commitment to include retired workers in his list of priorities. Governor Udom Emmanuel must have realized that the easiest way to cushion the effects of the nationwide hardship in the state, would be to effectively service the ‘engine room’ of the state’s economy. This, he did by ensuring that Akwa Ibom workers always smile to the bank as at when due. Regardless of whatever sentiments we hold, we must be patriotic enough to see the importance as well as commend the nobility in Governor Udom Emmanuel’s decision to prioritize payment of workers’ salaries. The governor is however, not neglecting other responsibilities like building infrastructures, creating jobs, ensuring security, providing an enabling environment for businesses to thrive, etc. The facts speak for themselves.

As Akwa Ibom workers prepare to join their counterparts all over the world on Tuesday, May 1, 2018, to mark this year’s Workers’ Day Celebration, they all have something to cheer up for. As far as Nigeria is concerned, there are only a handful of states that workers have it this good.

Edidiong Udobia is a journalist and writes from Uyo, Akwa Ibom State.