Governor Udom Emmanuel has again appealed to the federal government to consider executing some developmental projects in Akwa Ibom state in view of the huge contributions of the state to the national economy.

The governor said that it was quite unfair that a state that contributes the highest into the federal coffers, was yet to get a single kilometre of road project from the federal government.

Speaking while receiving the leadership of Eket Senatorial District Leaders Forum in his office, Governor Emmanuel decried the situation where the federal government is disbursing infrastructural development elsewhere, while the Eket senatorial district where the resources comes from, gets nothing. 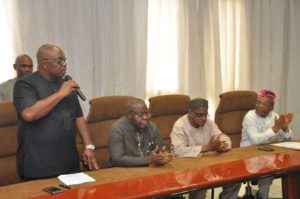 Suing for continued peace and love in the state, the governor said it was unnecessary for people to start instigating crises in the name of politics.

He called for maturity from all, saying that the only message that was best for the state was that of unity, peace and love.

He said the visit was commendable as it also demonstrated that his people back home are solidly behind him.

Responding, the Forum of Eket Senatorial District Leaders through their chairman, Chief Nduese Essien thanked the governor for championing peace and unity among the entire geo-political zones in the state. 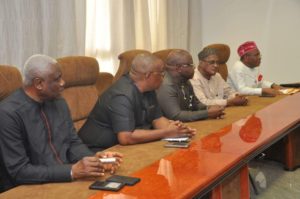 They appreciated the Governor over the appointment of one of their members, Dr Emmanuel Ekuwem, as the new Secretary to the State Government, describing him as a very admirable team player who will transfer his wealth of experience in public and private sector to the administration.

The Eket leaders said they were particularly worried when it appeared that a crisis was brewing, and threatening the very foundation of unity of the state, and had met immediately to seek ways of resolving the issues in the polity.

They said they were gratified when the former Governor and Senate Minority Leader, Senator Godswill Akpabio, came out to disown the disturbing media reports, and also his reaffirmation of support to the governor.

The opposition members who are desperate to take Akwa Ibom by all means, are banking on any form of disunity among the PDP, and this the elders maintained should be avoided totally. 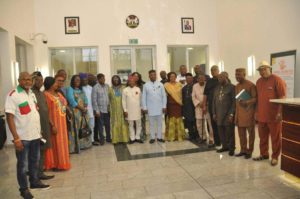 They commended Governor Emmanuel for his huge display of statesmanship and humility in handling the issue and restoring the confidence of his people, describing him as a good leader.

On the ongoing industries, roads and other infrastructural facilities springing up in the zone, they commended the Governor, adding that, “as the economic fortunes of our state improves, we wish to request that more attention be accorded our senatorial district in the allocation of projects, not only because of the low attention it had received from successive administrations in the past, but because of its unassailable position as the treasure base of the state.”

While thanking the other two senatorial districts for the support to their son, they again called on the entire state to remain loyal and steadfast to Governor Udom Emmanuel to complete its two terms.

“It is worthy of reference that we are on a political covenant with the rest of the state, that just as we supported the emergence of governors from Uyo and Ikot Ekpene senatorial districts to serve eight years each, our son deserves same unconditional support for eight uninterrupted years, in the interest of equity, justice and fair play,” they added.

“We convey the full support and solidarity of the entire Eket senatorial district, and pass a vote of confidence on our son and leader, His Excellency Governor Udom Emmanuel, who remains the best shoulders for the responsibilities of transforming our state from a civil service driven economy to an industrial driven base in the country.

Be the first to comment on "GOVERNOR EMMANUEL RECEIVES EKET LEADERS, SUES FOR FEDERAL PRESENCE IN A’IBOM"