Governor Udom Emmanuel of Akwa Ibom State has signed into force, the Cultism and other Violent Behaviour Prohibition Order 2018 with effect from March 12, 2018.

Speaking during the brief signing ceremony at Government House in Uyo, he said the Cultism and other Violent Behaviour Prohibition Order 2018, is actually to reenergize the already existing criminal code law, Cap 38, Laws of Akwa Ibom State dated 2000. 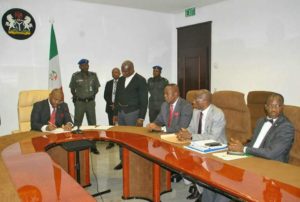 “Let me also implore other Local Government Areas that have actually embraced peace to continue to show that in their conduct and everything that they do, because we want peace in every part of this state.”

Earlier, the State Attorney General and Commissioner for Justice, Barr Uwemedimo Nwoko lamented that the problem of cultism and other unlawful societies in the state has become a major source of concern to His Excellency the Governor and the good people of the state. 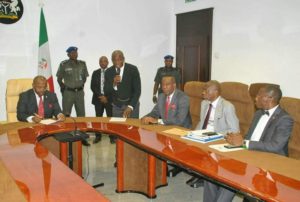 This he said is why the Governor made the order to prohibit and ban the operations and recognition or activities of all the listed cult groups as they are henceforth banned and prohibited in Akwa Ibom.

He said having reviewed the law, they have “come to terms with the fact that these penalties are not adequate as of today to serve as a deterrent to people who are found guilty of this law and so His Excellency is very soon going to propose to the House of Assembly an amendment to this law to raise the level of penalty and sanctions that will follow contravention of the laws.”

Nwoko decried the growing number of groups in the society, in secondary schools and even at other strata of the society.

He said, “just like any other law, it will serve no useful purpose if the members of the society do not rise up to support the law because even security agencies will need the cooperation and information from various communities, from various schools, from principals, from everywhere to identify the operations of this groups.”

“Some of them are operating in very secret manners and it is the responsibility of every Akwa Ibomite and every resident of Akwa Ibom who identifies or knows where they operate and the name under which they operate to bring to the knowledge of the security agencies and the government for effective action.”