Governor Udom Emmanuel’s commitment to massively industrialize Akwa Ibom State in order to create more employment opportunities, has started paying off with the coming on stream of the syringe factory, metering solutions company, tooth pick factory, as well as the pencil and toothpick factory, and is at the moment working on a funding model with a dependable partner in the Seaport project.

The Commissioner for Housing and Special Duties, Mr. Akan Okon gave the assurance at a media hangout on Thursday when he led some media practitioners round various completed and ongoing projects under his ministry to ascertain compliance with job specification. 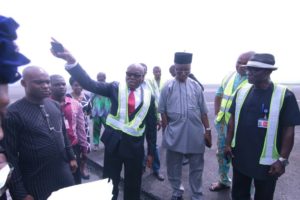 Okon stated that without dredging, the Ibom Seaport shoreline by design will berth large vessels noting that the Technical Committee on the IDSP project setup by Governor Udom Emmanuel has been upbeat in delivering on its mandate. He added that the project is promising compared to other ports where vessels stay in queue for days before discharging, due to poor access.

The team which also visited Ibom International Airport were shown round the terminal building, power station and taxiway, which according to the commissioner is designed to serve passengers convenience, ensure power distribution across the airport and an alternate tarmac for aircrafts, respectively. He lauded the state government’s uncompromising stance in maintaining the airport facility. 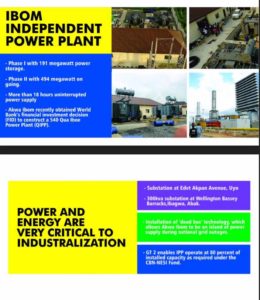 On the MRO component of the airport, Mr. Okon announced that the state government was working out modalities to attract investors to take up the facility.

Responding to question on why the Four Point by Sheraton Hotel in Ikot Ekpene was yet to commence operation, Okon explained that the delay was due to the acquisition of the managing firm; Starwood group by the Marriott group, assuring that the hotel would be open for operations soon.

Okon also enumerated the prospects of the multi-storey corporate structure the government was currently constructing at the old Uyo market site, the Special Duties boss noted that the building would provide office accommodation for business concerns as the ongoing industrialization programme of government gathers wave, saying no investor would find the state an attractive destination without such provisions.

He applauded the worker friendly disposition of Governor Udom Emmanuel, citing the rehabilitation works on the internal road networks at the state secretariat complex as a gesture that would allow the civil servants an enabling environment to discharge their responsibilities.

He called on citizens of the state to support the programmes and policies of the Udom Emmanuel administration, forecasting that with the lofty dreams of the current administration, the state was on her way to economic, social and political reckoning.