Governor Udom Emmanuel has inaugurated a new 1×60MVA, 133/33KV Power Transformer, with a reassurance of his commitment to provide enablers for industrialization and growth in small and medium scale enterprises in Akwa Ibom State.

Governor Emmanuel while inaugurating the new transformers at the Electricity Transmission Sub Station at Afaha Ube Itam in Itu local government area on Monday, said electricity remained the foundation for his industrialization agenda.

The Governor who acknowledged the collaboration with Transmission Company of Nigeria, TCN particularly thanked the company for the quick response after a recent fire outbreak that gutted facilities at the Afaha Ube Power Station.

Mr. Emmanuel said his government had to sign a contract for more fire equipment for the State Fire Service to take control of such ugly occurrence in the future alongside other precautionary measures.

The State Chief Executive expressed the hope that with the inaugurated power facilities at Afaha Ube, the substation earlier commissioned at Edet Akpan Avenue, Uyo would be able to have light 24 hours a day.

He expressed joy over the development saying, “Today, let me also say that we are marching towards there. Honestly, it is very easy, in the next one year, between 15 and 18 months, I can do power for all in this state conveniently with what we have done.”

He cautioned against vandalism and called on the people to protect power installations in their areas, explaining that it will be to their detriment if they allow vandals to do away with the facilities. 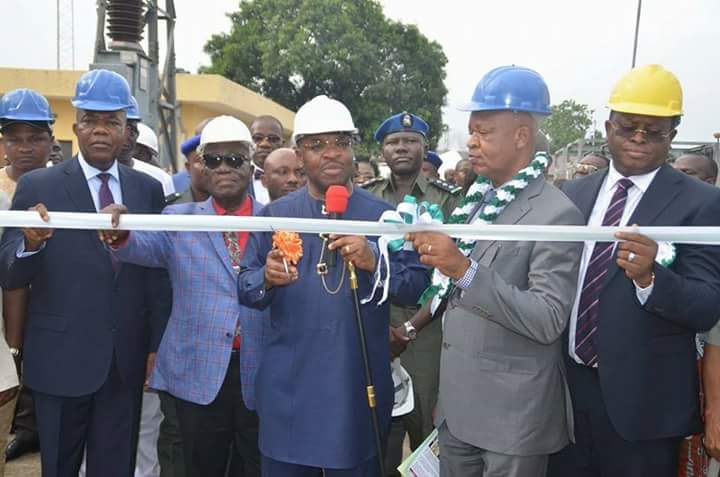 Governor Emmanuel warned that only verified staff should be allowed access to the substation, noting that the approach is a way of checking incessant vandalism of electricity facilities.

The Governor also told the people about the ongoing collaborative efforts between the state government and TCN in the construction of a new power station at Ekim in Mkpat Enin local government with a promise to inaugurate it in May 2018.

He announced his intention to discuss with the Port Harcourt Electricity Distribution Company, PHEDC to make the tariff affordable for Akwa Ibom people considering the fact that transformers and cables are provided by the State Government

He however encouraged electricity consumers to pay their bills to enable the distribution companies serve them better.

While reacting to a remark by the Village head of Afaha Ube Itam, the host community, Chief Gabriel Edet, the Governor said he had so far given four transformers to the community and promised to direct the Special Assistant on Power, Engr Meyene Etukudo to send his team to check and ensure that the community has electricity.

“You cannot host this kind of asset and then you do not have light. It does not happen anywhere, certainly, we will do that plus other things we are trying to do around this area.” the Governor explained.

According to the Governor, “there is nothing in this world today that you can do without electricity, so if I can fix light, I am moving seriously towards the cottage industries that we are promoting. So let our youths also take advantage of this and look at what they can do for themselves because power is provided.”

He warned developers against building under high tension cables and said that the State Government will soon embark on the demolition of such structures for the safety of the people.

Earlier, the Managing Director and Chief Executive Officer of TCN, Mr Usman Gur Muhammed appreciated to the Governor for his collaborative efforts towards the project, and assured that with the new facilities, the company can undertake maintenance services on either of the installations without causing consumers to experience blackout.

The MD of TCN who was represented by the Head, Transmission Service Providers, Engr Victor Adewumi said in line with incremental power policy of the present Federal Government, the company was implementing transmission rehabilitation and expansion programme by extending its network, building new substations and strengthening the existing stations all over the country.

He said with the commissioning of the transformer, some local government areas including Oron, Uyo, Mbo, Ikot Ekpene, Abak, Essien Udim, Onna, Airport axis and their environs will experience remarkable improvement in their power supply.

Mr Muhammed told the people that TCN was collaborating with Akwa Ibom Government to install 2×60MVA Substation at Ekim in Mkpat Enin based on Governor Emmanuel’s efforts to improve the economic development and social wellbeing of Akwa Ibomites.

On completion of the Ekim substation project, he said the station will provide electricity to Ikot Abasi, Mkpat Enin, Onna, Oruk Anam, Eastern Obolo, where such institutions including, Akwa Ibom State University, AKSU, Metering Factory, Syringe Factory, Coconut refinery among others are located.

He called for significant investments in the distribution network as inadequacies in that area will limit the amount of power delivered to end users.

“Nigerian Electricity Industry is still facing liquidity problem, it is important to note that the only way the TCN’s rehabilitation and expansion programme can give maximum benefit to the nation is if commensurate investment is done on the various distribution companies nationwide.”

He also discouraged developers from building structures under transmission right of way saying that catastrophe is better imagined should a high voltage power conductor snap.

The TCN Boss advised PHEDC to fully take advantage of the additional capacity of the transformer inaugurated by radiating more 33KVA feeders out of the station to service their consumers. “Even presently as we speak, the station is with 144 Megawatts available at the station now but PHEDC only manages to pick an average of 20 Megawatts which is just about 40 percent of the available capacity”.

He stated that the Ministry of Power will continue to support all its agencies to deliver on their mandates under the incremental power programme.

The Village head of the host community, Afaha Ube Itam, Chief Gabriel Edet had thanked Governor Emmanuel for the intervention on the project and called for assistance to his community through adequate power supply and employment of his subjects at the substation.

Chief Edet alleged that since its establishment in 1984 no indigene of the community had ever worked at the station.

Be the first to comment on "GOV EMMANUEL POWERS NEW ELECTRICITY TRANSFORMER, SAYS INDUSTRIALIZATION ON COURSE"