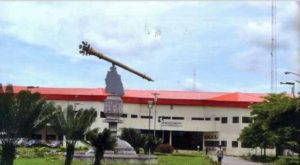 Let me begin by commending the leadership of the Akwa Ibom State House of Assembly for instituting this capacity workshop for the Assembly Press Corps and correspondents covering the Assembly.
Without equivocation, I wish to say that this gesture demonstrates the concern of Mr. Speaker and his team to ensure that the Assembly’s activities, especially legislative sessions are well understood and reported explicitly.
It was a former British Prime minister, Benjamin Disraeli (21 December 1804 – 19 April 1881), who stated that, “Upon the education of the people of this country, the fate of this country depends.”

Today, it is not Britain but the Akwa Ibom State House of Assembly. It is, on this premise, that we appreciate the essence of this workshop as it will further enable reporters and correspondents to be well versed on the technicalities of Legislative Sessions for better reportage.
The theme “Reporting the Legislature for Sustainable Development” is quite apt and will offer deep prognosis on the ever demanding subject of development and the parameters for our fundamental contributions.
Mr. Speaker, I must thank you therefore for inviting me to this workshop. I will not fail to acknowledge that the scope of this seminar, from the angle of making it residential and also attracting good facilitators, is uniquely different from previous ones.

It is quite fantastic and worth being associating with.

I
I take particular interest in the capacity workshop because the beneficiaries are journalists and it is coming at a time that NUJ is concerned about training and re-training opportunities for members.
I recall that during a courtesy call by the State Working Committee on Mr. Speaker on Monday, February 01, 2016 in the Assembly, this was one of the issues discussed and Mr. Speaker has kept his words even beyond the promise.

It is obvious that journalists in the Assembly will through the opportunity of this capacity workshop become not just conversant with Legislative Sessions but will effectively appraise the role of the House and the Honourable Members in the development wheel of the State.
The media industry in Akwa Ibom State as we may know keeps growing. It is clear that we rank as the third largest media market in Nigeria.

This size informs the need for collaboration with the various arms of the government and other institutions for robust exposures to local and international conferences/workshops.
It is a truism that Journalism entails a high degree of public trust and to earn and maintain this trust, it becomes morally imperative for every journalist and every news medium to observe the highest professional and ethical standards.

Therefore maintaining a healthy regard for public interest is necessary for media practitioners in exercising these duties.
Also in adhering to truth as the cornerstone of journalism, we emphasize the need for due diligence amongst members to ensure that our reports are factual and that our editorials, commentary and news features are guided by fairness without causing defamation that may attract litigation.
On this note, I encourage participants at this workshop to take full advantage of the various training that will be made available to them so that they will come out better than before in their Assembly’s reportage.
I have always said that if Akwa Ibom State is dear to us, we have to collectively work for it and preserve its successes. NUJ under my watch has consistently engaged in advocacy to foster unity beyond borders.

Let our elites, public officers and politicians join hands to develop the State.
Finally, let me commend the Speaker and members of the Assembly for ensuring an effective relationship with the executive arm in the management of the State. This has reflected in early passage of the 2017 Appropriation Bill into law and supporting other infrastructural development engineered by Governor Udom Gabriel Emmanuel
I wish you all fruitful sessions. God bless us all.
-Being a solidarity message by Elder Patrick Albert, State Chairman, Nigeria Union of Journalists (NUJ), Akwa Ibom State Council on the occasion of the commencement of a 2-Day capacity workshop organised by the Akwa Ibom State House of Assembly for Assembly Press Corps and Correspondents, on Monday, MAY 15, 2017.