The Market which was popularly known as Urua Anwa Aya Obio Akpa was operating under Thatch structures which made it difficult for the traders to engage fully in their various market activities especially during rainy season but not for the divine and timely intervention of her Excellency who through her Pet Programme ordered for the construction of an Ultramodern Market Facility that will accommodate the Traders of the Market no matter the season.

The Facility has two Phases. Phase1 was commissioned on thursday as a Pet Project of her Excellency through FEYREP in partnership with the Office of the Special Assistant to the Governor on Traders Matters. It has a well furnished fifty standard Lockup Shops, two hundred Open Shops, Abattoir, Borehole etc while the soon to commence Phase11 of the project will feature Police Station, Micro-Finance Bank, Pharmacy, Health Center, leisure Park etc. 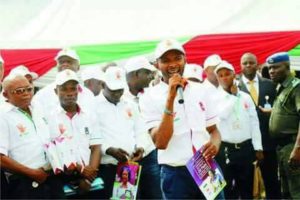 In her goodwill message to the people of Oruk Anam during the memorable event, Mrs Udom applauded the good people of the area for giving her the needed support and a conducive environment towards making the pet project a reality in such a short period of time(2months). She hinted that she will do her best to transform the Area into a complete center of Commerce so that life will be easy for the people living in the area owing to the fact that she is a daughter of the area.

Mrs Martha thanked God for such a glorious feat achieved within 2months and dedicated the achievement to God for it is not by her might but by the special grace of God. She promised the great people of Oruk Anam that, with more of their support, she will bring more greater things to them while appealing to them to rise to the faith of greatness by getting engaged in activities that will bring progress and development to the area because there is dignity in labour.

She also appealed to the Transition Chairman and S.A Traders Matters to engage the people in the area more by making the activities of the market a daily routine.

In a goodwill message on behalf of the Traders, the Special Assistant to the Governor on Traders Matters; Akparawa Idorenyin Raphael, poured encomiums on the Governor who he referred to as “Traders Friendly Governor” and a Promise Keeper.

He thanked the Governor for keeping to the promise that he made during the campaign in 2015 that he will create an office for the Representative of Traders, Support the Traders with loan Facility and a Vehicle. These, he has done for the Traders within 2years…he said.

He further made it known to the people that the Traders have unanimously agreed to support the reelection bid of His Excellency, Deacon Udom Emmanuel in 2019 by opting to purchase the 2nd Term Governorship Form for him as a show of appreciation to the Governor for keeping to the promise that he made with them.

Mr Idorenyin also thanked the Wife of the Governor in a very special way for having deemed it fit to partner his office in executing such a giant project within a short period of time. He eulogized Mrs Udom for her kind gesture, show of love and concern towards the living standard of the People of Oruk Anam and its environs.

He added that, it takes only a woman with the heart of gold to make resources available for the implementation of such a gigantic project and so Akwa Ibom Traders are proud of Mrs Martha for making such a drastic decision to transform Oruk Anam.

He promised that his office will continue to open doors of partnership with Her Excellency and other well meaning men and women of our dear state; Akwa Ibom so as to continue to deliver more dividends of democracy to our people.

The Special Assistant who was so overwhelmed by the support and solidarity by the people of the area who turned up massively for the epoch making event, called on great men and women of the state especially his fellow Government officials to join hands to consolidate on what Deacon Udom Emmanuel has done so far, in our respective capacity so that the people will continue to feel the impact of good governance in the state.

However, dignitaries who spoke during the event on behalf of the members of their respective categories, did that in one accord by endorsing the reelection bid of Deacon Udom Emmanuel and pledging to continually support his government beyond 2019.