In a condolence message at the funeral service held at Christ the King Catholic Church, Mbiatok Itam, Itu Local Government Area, Governor Emmanuel, who was represented by the Honourable Commissioner for Information and Strategy, Mr Charles Udoh, described the deceased as a devoted father and Christian who lived an exemplary life of service to his fatherland and left indelible imprints which death cannot erase.

He said that late Otuekong, despite his huge responsibilities covering as wide as swath as Local Government and Chieftaincy Affairs, Political and Legislative Affairs and other assignments as were deemed fit, discharged his tasks credibly. 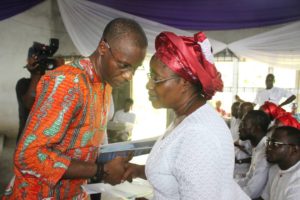 According to him, late Akparawa (Arc.) Idongesit Udokpo contributed immensely to the growth and development of Itu LGA, his home town, and was known and identified with the sterling virtues of hard work, diligence, discipline, and commitment to excellence, adding that the memory of his accomplishments and diligence will remain a lasting legacy which shall be conserved in the hearts of many he touched with his quintessential life. 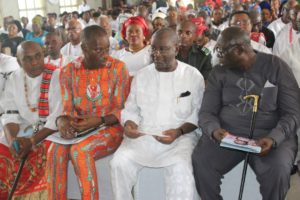 Late Idongesit Udokpo was Commissioner of Special Duties during the Obong Victor Attah-led administration in 1999. He died on 1st December, 2017 after a brief ailment. He was aged 60.

Be the first to comment on "A’IBOM STATE GOVERNOR, MR UDOM EMMANUEL CONDOLES WITH THE FAMILY OF LATE IDONGESIT UDOKPO"