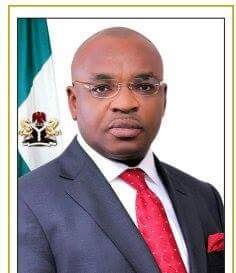 Events of recent have continued to add feathers of renown to the name and person of Governor Udom Gabriel Emmanuel. Character can not be faked,you either have it in you or what you pretend to be filters the uncultured you to the world unknowingly. Not a few have misperceived Mr Udom Emmanuel has cocky and proud,and have even dared to air such misconstrued perception, yet over time, we have come to see and accept Mr Udom Emmanuel as a complete gentleman even to a fault.
Being a well breed Christian, under parental discipline according to Biblical standard, there are traits instilled from childhood by responsible parents as instructed in scripture, to bring up a child in the way he should go and that when he is old,he will not depart from it.

The weaknesses of Christian up bringing as it may be termed in the eyes of violent,aggressive inhumane political class remains the very core values and inner strength that sustains a leader of a state  like Akwa Abasi Ibom. The scriptural demands of ; As long as it lays within you,follow peace with all men,no doubt is a guiding principle in leadership style and Administrative tenets of this God reverencing Administration.

Not minding the powers at his beck and call as Governor, Mr Udom Emmanuel has often appealed for reason,fairness and equity where he could as well have used force and a snubbing attitude. Quite often,people who claim he snubbed them lacked self confidence and quake at his God based carriage of superiority, which is no fault of his.

1). Soon after his landslide victory for the hill top mansion,he wasted no time to sue for peaceful coexistence for the building of our only state by stretching out  a right hand of fellowship with an olive branch which not a few embraced then while others followed just of recent. The battle for the plum  job was really messy,the propagandas and calumny vicious,yet he found a heart to accommodate beyond party lines,acknowledging that he is The Governor of Akwa Ibom State,though appreciative of his Party platform he leveraged on to attaining such heights and uncommon feat.

Though some have derided his peaceful ambiance for weakness and engulfed themselves in shameful attacks and criticism worthy of brute beast in the wilds of nature,yet he has always kept his cool,level headedness which saw to the overwhelming applauds bestowed on Obong Umana Okon Umana the moment he publicly endorsed peace by visiting the governor on the auspices of oil and gas commission.

3). 5000 reengaged Teachers who took option for war met an Administration who would rather sue for peace by giving them a second chance to ascertain their worth and economic value to the state than prove its point that the processes of employment were marred by fraudulent actors of questionable character out to swindle the system compared to other state Government who verbally attacked and attempted to push down the throat of citizens and students that theirs was a constituted authority not minding numerous lapses.

President Goodluck Ebele Jonathan stayed humble and peaceful because he valued the lives of Nigerians and openly declared that his victory was not worth the blood of any Nigerian Child, and that gave room for APC to plunge us into this prevailing economic mess.

We have learnt from the peace of Jonathan and will not allow this prevailing peace and unprecedented humility to be taken advantage of by APC in Akwa Ibom State. We are committed to our future because we know the reason for the peace we are witnessing is because our Governor is ever thinking of a better Akwa Ibom for the next generation rather than the next election.

Blessed are the peace makers for they shall see the the hand of God fighting for them while they hold their peace. A man can only give what he has,Qua Iboe Church will soon know lasting peace because they have chosen to acknowledge a peace maker in their midst.

We should all be thankful to God Almighty for sending us A Governor that is mindful of the essence of peace,which makes room for development and Industrialization drive. Our brothers with Federal Political appointments should tread the path of honour like Obong Umana Okon Umana did and use their appointments for peace instead of rancour for cheap political gains, for political appointments will come and go but Akwa Ibom remains the only state we can truly call our own and home.