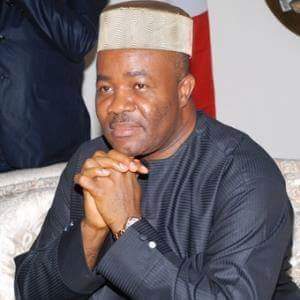 The attention of the Senate Minority Leader , Godswill Akpabio has been drawn to a statement circulated on the Internet by a group that goes with the acronym MURIC, which claimed that the former governor had kicked against the confirmation of Ibrahim Magu as the substantive chairman of the EFCC because “Magu wants us to confirm him so he can use some of us for pepper soup.”

Ordinarily, the purported statement which can best be described as the figment of the purveyors imagination shouldn’t have been dignified with a response, but because the devilish intent of the sponsors is to paint the Senate Minority Leader in bad light before  Nigerians, it becomes  imperative that the records be put straight and some germane questions asked the sponsors of the fabricated story and some online media who allowed themselves  to be used to spread this message of hate and complete falsehood.

We would want MURIC to disclose the location where Akpabio  purportedly made the statement, the audience he addressed and also provide a record of the interaction  before Nigerians would take them and their infantile claim serious. We believe MURIC, as a serious organization should not be a purveyor of beer palour gossips, that defy reason and logic.

From the record of proceedings in the Senate on the day Mr Magu was screened, which was streamed live, we are yet to see the scene where the Senate Minority Leader made such non existing statement. We challenge Mr Ishaq Akintola, who claimed to be the director of this group to go beyond mere allegation in order to please his pay master, but should go a step further by providing proofs to buttress his wild and unfounded allegations.

Those behind this blackmail and campaign of calumny against Akpabio, should note that even the coinage of the statement is very much unlike Akpabio.

The Senate Minority Leader, even in his very informal discussions couldn’t  have gone that low with such a flawed statement. Senator Akpabio is not a tout, therefore such statement as quoted above couldn’t have been made by the former governor.

We advise sponsors and purveyors of hate and  falsehood against the person and office of the Senate Minority Leader to leave him alone and allow him face the legislative duties which he was elected to carry and not bring undue distractions on him.

We call on members of the public to disregard the statement allegedly attributed to the Senate Minority Leader, and see it as the handiwork of mischief makers and political jobbers who would not spare anything at getting at him.