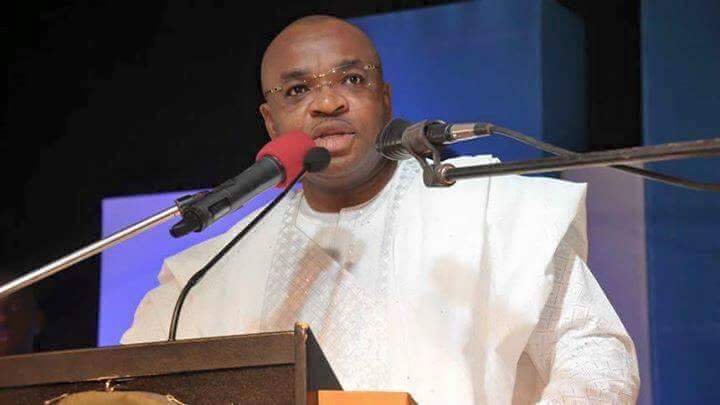 The term Industrialization has been defined in various ways,depending on the context, but the most common definition by Wikipedia is that Industrialization is the period of social and economic change that transforms a human group from an agrarian society into an industrial one, involving the extensive re-organisation of an economy for the purpose of manufacturing.

According to Encyclopedia Britannica,Industrialization is the process of converting to a social Economic order in which industry is dominate.

Governor Udom Emmanuel had during the electioneering campaign that brought him into office in 2015, promised that he was going to industrialized Akwa Ibom State,as the Governor . On assumption of office,it is on record that the Governor has taken steps towards ensuring that those promises are fulfilled.

The Government has recorded successes in some areas as regard its policy framework,while in some,little or no attention has been given. The Government in less than two years,has been able construct roads, notably the Information drive,5km Mkpok-Okat road in Onna,Eket-ibeno road,construction of Urban roads in Oron, Etinan ndon eyo road, Eket- etinan ,etinan uyo road and others .

For Machiavelli ,politics is about one and only one thing: getting and keeping power and authority. Everything else: commerce,law ,religion. Morality ,etc that people associate with politics has little or nothing to do with this fundamental aspect of politics, unless being moral will help one to get and keep power. The only skill that counts in getting and maintaining power is calculation,the successful politicians must know what to do or say for every situation. In a “letter to Francesco Guicciardini” Machiavelli declares his prescription thus.

For a long time I have not said what I believe, nor do I ever believe what I say, and if indeed sometimes I do happen to tell the truth, I hide it among so many lies that is hard to find.

With this insight, it is clear that if the ruler makes one miscalculation, all the authority he has so assiduously cultivated will dry up like the morning dew. Thus, the social and political world of Machiavelli is monstrously unpredictable and volatile ,only the most super calculative human mind can overcome this social and political volatility.
Coming down to the issue of the factories currently in production in Akwa Ibom,that is the Peacock paint, the tooth pick and pencil factory,the is need for serious calculation by the Government on these projects,because any miscalculation,will amount to an act in futility.

In my respective view,I think these industries should be privatize,it is not the business of Government to manage industries,because of too much politics in the system.

I know some politicians will oppose this view because of their interest,by maintaining that Government can establish and run businesses,but I challenge anyone to show me were it has worked in Nigeria before,for how long,and how much did that Government benefited from it,if truth must be told.

Taking a look at the history of Nigerian Newsprint Manufacturing company(NNMC), Oku iboku,which I researched as a final year project at the University.

The Construction work of NNMC started in late 1977,while test production started in 1985,the mill was officially commissioned on the 19th of july 1986 by the then President, Ibrahim Babangida and finally completed in 1987. The project cost as restated in February 1983,was three hundred and five million Naira. NNMC was designed to produce 100,000 metric tones of newsprint per year to meet the current and projected requirements of the Nigerian newsprints paper house. Since the company started production in 1987,the company was not able to achieve an average installed capacity of 100,000 metric ton,the highest it ever produced was in 1990 and that was 3.7 percent or 37,000 metrics tons while the least it produced was in 1993 with a declining productivity totaling about 3.6percent of 3,600 metric tons of the installed capacity,by 1994,the plants equipment and machinery were finally shutdown.

This was largely so because the Federal Government who had 90 percent share,while Akwa Ibom and Cross River state shared the remaining 10 percent ,was running the business ,getting more involved than just staying on advisory role,hence,corruption,over invoicing,managerial tussle,politics became the order of the day,unqualified people were employed as slots from politicians,none availability of the long fibre pulp, these and many other reasons,led to the collapsed of NNMC,and its subsequent liquidation in 2008 by the Federal Government to Negris Holding Limited for 32.5 million dollars.        Government should not play politics on privatization,and the people of the state needs to know,and see the extent to which progress is being made.

For instance,during Obasanjo’s regime, his Administration on assumption of office inherited a net-work of just 400,000 telephone lines, but this figure rose to over two million soon after the telecom sector of the economy was open to private investors,telephone which was before a status symbol, now became affordable even to the shoe-shinner.

This feat was attained not only without Government investment, but over one billion US dollars accrued to Government coffers as license fees. Another interesting story is that of the Nigeria Airways, the National air carrier, It was said that when the then General Olusegun Obasanjo left power as a military ruler in 1979,he handed over 32 Nigeria Airways Aircraft to his successor, Alhaji Shehu Shagari . In 1999,twenty years later, when Chief Olusegun Obasanjo returned as Democratically elected President, only one aircraft was flying, yet the National carrier was maintaining a staff strength of over two thousand five hundred men and women. All these changed with privatization.

I want to believe that, the Administration of Governor Udom Emmanuel is not playing politics with projects,because the citizens needs to be carried along,irrespective of party lines.

John F. Kennedy said” In a time of domestic crisis, men of goodwill and generosity should be able to unite regardless of party or politics”.

This can be done through public private partnership where Government acquires Land and provide needed facilities like water ,electricity,roads in these environment were housing Estate are to be considered.
The developers,depending on the MOU could build ,operate and Transfer to Government after recouping their investment in the agreed number of years.

Housing projects has always benefited the Government more at the long run,except when not done properly,letting politics take a greater part of the project. One will wonder why Group captain John Ebiye within just nine month tenure, initiated and completed a low cost housing estate of 100 unit at Udo udoma Avenue, which was later named after him as the Ebiye Haven and were sold to civil servants.

The state Government also benefited from Eniong/Ewet housing, inherited from the Cross River State Housing Cooperation,later in 1988,the state Government built more 111 houses. As time went by, lands were allocated to individuals ,thereby getting the Estate fully developed. By 1997 under the administration of Navy captain Joseph Aduesi,housing was made a priority when he established the Akwa Ima housing estate in ikot Akpan abia,which served partly as residential quarters for member of the State house of Assembly.

The shelter Afrique housing project too recorded success,the Osong Ama estate developed by individuals and others.                   So far so good,the Government is working,while more is expected.

I Arise to the faith that Akwa Ibom State shall be great.
GOD BLESS AKWA IBOM STATE.
Forwarded by Abasiubong Tom