Several articles, memos has so far been written and published by trailer reporters, managed by Eneh John about the representation of the Eket State constituency lawmaker, Rt. Hon. David Lawrence, aimed at tarnishing the image of the lawmaker and make him appear bad before the people, but the truth about the Lawmaker is clear enough for anybody to see.

One thing Eneh John does not know is the fact that Rt. Hon. David Lawrence is not a newcomer or novice in politics, or how to relate with his people and get feedback, as one who is a silent achiever. The Lawmaker who had a profession, worked at Kalis Airline, Admin Officer/Personnel Assistant to the Managing Director between 1992 – 1995, Oscar Marine Limited as Admin Officer/Personnel Assistant to the Managing Director 1995 – 1996, Admin/Operations Manager 1995 – 1997, as well as General Manager 1997 – 2002 managing Director/Chief Executive Officer of Goldwater Marine International Limited between 2002 – 2014 did not come into politics to loot the money of the constituency, but for service. 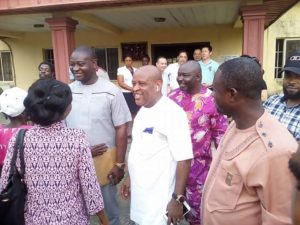 Since assumption of office as member representing Eket State Constituency, he has embarked on many life touching programmes that are beneficial to his constituents ranging from training of youths and women in different fields of endeavours. Hon. David Lawrence has assisted many sons and daughters of Ekid origin and attracted some laudable projects to the area. He has just completed an ICT Training Center built to train hundreds of Ekid sons and daughters to be ICT compliance in line with his legislative mandate of changing the lives of his constituents for good.

His leadership style and effective representation of the people is so obvious, that even somebody who is aspiring for his position in 2019, which is a normal thing in politics, people must come out to contest and all that, openly told the people that the leadership style of Rt. Hon. David Lawrence is commendable.

Hon. Ekanem Willie, a former vice chairman of Eket local government and the political leader of Ikot Nsidibe community Okon area of Eket was quoted to have said ” The only position that I hereby offer myself publicly that I will aspire to continue from the effective representation that David Lawrence is doing in the Legislature is the State House of Assembly.” This is to show that though as politician who wants to contest election, he has acknowledged the the fact that the present representation is effective.

Going through the articles written by Eneh John, one can feel pure hatred coming from one who claims to have his people interest at heart, yet feels bad about the progress of his people, but take pleasure in promoting outsiders, and was quoted to have said ” Your present elevation to the position of Deputy Chief Whip in the house of Assembly, is a rape on democracy, because, positions are gotten on merit, but yours was on the basis of ineffectiveness”

This was a very sad thing when I read it, because I am a priest and I have So many friends, associates, who sing the praises of Rt. Hon. David Lawrence, base on his performance, assistance to the people in terms of school fees, money for women to trade, and all that. So for somebody who does not even know the things the lawmaker is doing for the people, because he has refused to ask questions about it, as well as the legislative procedures as regard the House of Assembly constituency briefing, to be writing articles up and down against the representation of the Eket Lawmakers is a pure case of ignorance.

In one the articles, Eneh John wrote: “While your colleagues in the Assembly organizes constituency briefing, award of scholarships and empowerment programmes in their constituencies, your likes continue to wallow and lay wasted in the house, without nothing to show for as a project”

Eneh John, I want you to take this to the bank, that before a constituency briefing is organized by any lawmaker as far as the legislature in this State is involve, there are procedures, which includes the house rules, ranking, members financial contributions and time, hence no lawmaker can just wake up and buy cars, working tools and all that to display worth millions without following the procedures or contributions of the other members.

On the other hand, it is wrong for anybody to mislead the public by saying that Rt. Hon. David has not empowered his people, because he has, and he is still doing it. Though I am not saying that citizens should not hold their representatives accountable, but should be done in modesty, after a proper findings unlike the way Eneh John is going about it. The Eket Lawmaker to the best of my knowledge is briefing his constituents daily, by interacting, giving, and showcasing his intention to make a Eket great, except for the likes of Eneh John who does not see anything good in the government in power in Akwa Ibom state, which he had longed extended to the House of Assembly, but will always promote and reports good stories about Delta State and others, what an hypocrite.

Is Eneh John aware that Rt. Hon. David Lawrence pays over 1.5 million naira monthly to some people he is empowering, training on different skills acquisitions?
Is Eneh John aware of the impact the Ultra Modern Market, which is replacing the old Urua Nka will create to the people of Eket in the future?

In case he is not aware, this project was initiated by the member representing Eket State constituency in the state house of Assembly, Rt. Hon. David Lawrence, and CICASA West Africa company Ltd is in charge of the remodeling, and the project which was estimated at 9million naira with a total capacity of 5,000 shops.

The face of Eket Sport Stadium is wearing a new look, as a result of the influence the Eket Lawmaker has brought, by attracting projects to the area, by his cordial relationship with the Governor, and by supporting what is good.

I hear Eneh John boast that he will be at TeamNigeria program on Planet Radio to further display his ignorance against the House member, the misinformed program I can not waste my time listening, because that program has since lost its value and focus, i wonder why the management of Planet Radio still allows such program to exist.

Rt. Hon. David Lawrence is a silent achiever, who knows his onions, with support from the people, all his plans for the area, will become a reality.

Be the first to comment on "ENEH JOHN’S OUTBURST ON HON. DAVID LAWRENCE: A CLEAR CASE OF IGNORANCE"