This is no doubt the man’s world and Elsie Esara has gotten her fair share of wind taken out of her sail. Despite the assumed misgivings surrounding the incited Itu saga and the numerous mischievous misdirections by APC apologist seeking to make cheap political gains, Mrs Elsie Esara,the Transition chairman of Itu local government has performed above par compared to her numerous male counterparts with exception of the likes of Itoro Columba of Ikono local government Area.

There are other local government Areas whose Chairmen have not built a single pit toilet nor change a leaking roof like in Uruan local government area under Dr Edwin Okon,yet hell has not caved him in nor heaven fallen on his head. 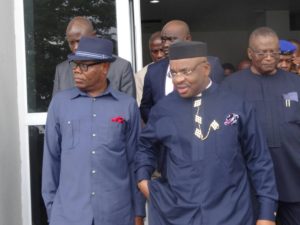 Amidst paucity of funds Mrs Elsie Esara embarked on projects in Itam market and other Internally Generated Channels to boost economic activities in Itu,while empowering over 180 Youths from funds generated on every market day to stem restiveness in the area and awaken the Dakkada spirit in hitherto despondent populace. She also swung into action by providing temporary shelter for the displaced of Itu in the unfortunate massacre on boundary dispute between our sister state.

She is a strong woman who seeks to leave a legacy for the present Team of Transition members in Itu,yet the crop of newbie politicians who think in terms of immediate gratification have thought it wise to eat their future than build a step to aid them climb higher in the political game or career.

This Amazon’s forthrightness has won her strong enemies who think in terms of greed than the people, while she seeks development with available scarce resources,her detractors seek our downfall, yet who can curse the blessed. She should rather be applauded than sacrificed because she is a woman.

Findings have buttressed salient points of well orchestrated conspiracy and like the sponsors of Boko Haram found it hard and regrettable controlling their hatchet men,the sponsors of this menace had since lost control of the twist and turns that daily assails them to their outer dismay.

Elsie Esara became transition Chairman out of sheer grace of God on constitutional provision of 35% and not on any age long acquaintance with the high and mighty as Mischievous Journalist hired by APC are painting.

To build an edifice for Itam market after 36 years of dilapidated structure instead of embezzling funds is a great feat by a “Woman”. She is worth more than seven men her size across the state. The market is to serve as a mini clinic and data collation centre for the good people of Itu local government area.

In seeking to tarnish her image and that of another great achiever in the person of Mrs Martha Udom Emmanuel, the enemies of these mothers of our time have stroke the wrong cord and have only succeeded in provoking these great Women to do more for their generation.

Mrs Elsie Esara’s epoch achievements is enough reason for women of her calibre to be given ample opportunity to serve in leadership positions.

We in Coalition Of Youth Leaders In Akwa Ibom State with all sense of modesty,Responsibility and support for good governance hereby nominate and unanimously bestow on this Amazon an Award as Transition Chairman of The Year 2017.