Several political leaders from Ikot Ekpene Senatorial District have visited Governor Udom Emmanuel in a show of unflinching support, reaffirming that despite the defection of Senator Godswill Akpabio to the state opposition APC, they have resolved to maintain their integrity and support the Governor’s re-election in 2019.

They have also promised to produce a new senator who will reclaim the seat of the senatorial district for the Peoples Democratic Party, insisting that they can never be part of any arrangement that will portray their children or people in bad light in the future.

Their visit coincided with that of thousands of women, drawn from across the 31 local government areas of the state who besieged the Government House pr 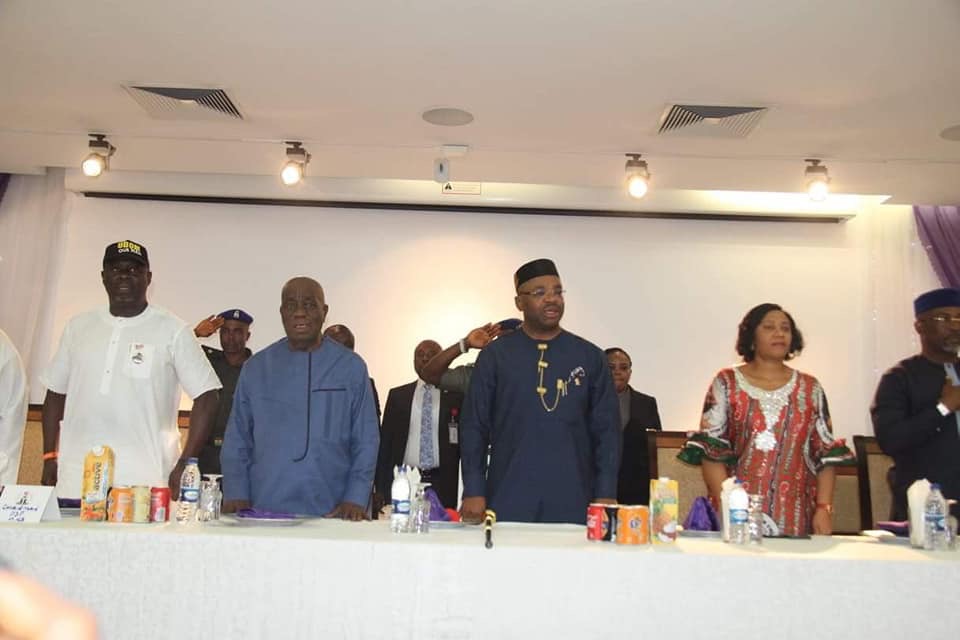 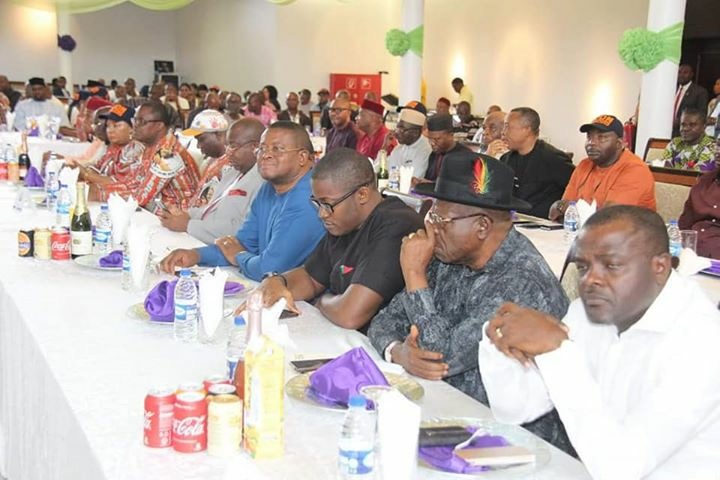 emises in Uyo, also to demonstrate and reaffirm their continued loyalty and support for the Governor.

Eshiet said, in view of what has happened in the state, their visit to the Governor to reaffirm their unflinching loyalty and support became imperative.

Also speaking, the National Legal Adviser of the PDP, Emmanuel Enoidem told Governor Emmanuel, “We have come not just to greet you as our in-law, but to reassure you that we in Ikot Ekpene Senatorial District stand solidly behind you and that come 2019, we will return you as the Governor of our great state.” 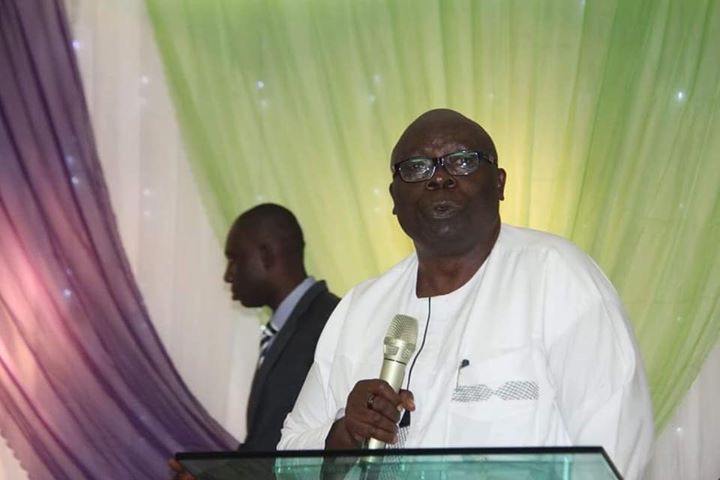 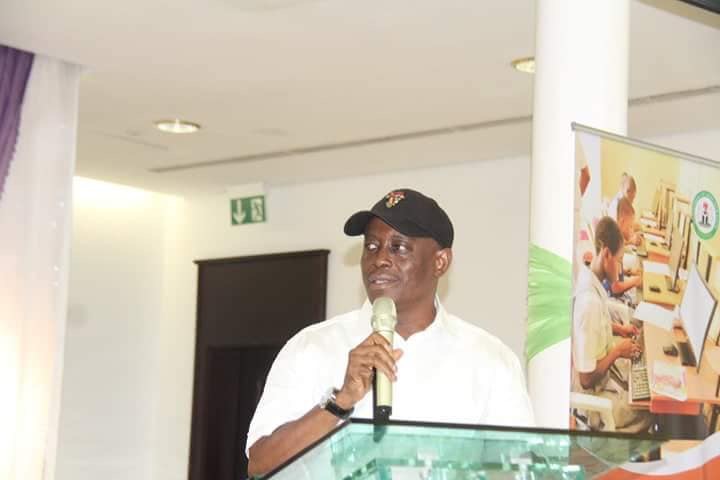 Enoidem noted that in their team, were party members and leaders drawn from the 10 local government areas that make up Ikot Ekpene Senatorial district. “If you check, you will see that the founders, the operators, the managers and all the people that make things happen in the party (PDP) are all here with us; meaning you have nothing to fear.”

“And because you have come to Ikot Ekpene Senatorial District to choose the deputy governor, we have decided to throw our weight behind you,” Enoidem added.

On his part, the former deputy Governor of the state and another party stalwart from the zone, Sir Chris Ekpenyong said, he had had to rush out from an earlier engagement to join the train, just to demonstrate one point to the Governor, “We stand with you. No Shaking. Nothing spoil”.

Ekpenyong further told the Governor, “Don’t be afraid, the storm will be over very, very soon. Come 2019, we will win the election and win it decisively”. The former deputy governor said, it was a taboo in Annang land for an in-law to be betrayed and that was the more reason they decided to support Emmanuel, to demonstrate to him that they are men of honour and integrity and that all their commitments and reassurances to the Governor, come from their heart.

Speaking in similar vein, Senator Emmanuel Ibokessien told Governor Emmanuel, “These are the generals in their respective local government areas, wards and units and as such there was nothing to fret about.

Using a local proverb, Ibokessien said, it was unheard of in Annang land where an in-law is betrayed; “We are not ready to die so, we’ll stand with you and if death comes, we’ll die with you”.

For the Deputy Governor Mr. Moses Ekpo (MFR), the people of Ikot Ekpene place a premium on integrity and as such they have decided to stick with the Governor. He told the people, “I have worked with this man (Emmanuel), and I have no regrets. I believe in him because he is a man of integrity. He stated that 98 per cent of the people of Ikot Ekpene Senatorial District are with the Governor.

The Deputy Governor further told Governor Emmanuel that 2019 is not only a year of victory for the PDP, but a year in which God is going to show His glory.”

On his part Obong Ukata S. Akpan, from Ikono/Ini federal constituency, said Governor Emmanuel was God’s choice for Akwa Ibom and as such, there was nothing anybody could do about it even as he told the Governor, “God sent Governor Emmanuel, a very good manager, to his people at a time of economic adversity so that His people would live in abundance in the midst of want. Obong Ukata said, it’s the people that make the king and not vice versa.

On his part the House Leader, Akwa Ibom State House of Assembly, Sir Udo Keirian told Governor Emmanuel to stand strong and trust in God who decides the affairs of men.

Speaking on behalf of the women of the zone, Obonganwan Lovina Umohefa, first senatorial woman leader of the zone, said they stand for justice, fairness and equity.

She said, they supported former Governor Victor Attah from Uyo Senatorial District for 8 years, and same for the immediate past Governor Godswill Akpabio. “Why would Udom be different?” She asked, adding, “We will not only vote Udom, but we will man all the wards and units to make sure our votes count.”

Speaking on behalf of the youth of the senatorial zone, Prince Ukpong Akpabio, reassured the Governor, “The youths of Ikot Ekpene will not leave you. We are PDP and PDP we will remain”.

The State Chairman of PDP who also spoke at the occasion, said, “I can see the generals and the confidence they displayed, and so I know it’s PDP and PDP and PDP”.

Governor Emmanuel, while responding, thanked the team for their visit and assurances, saying “to whom much is given, much is expected as such, I will reciprocate this gesture and overwhelming show of love and support.”

The issue in contention, Emmanuel said, is not all about Udom Emmanuel but “about our state, our future, the generations yet unborn.” A mistake by one man, can negatively affect the course of history of a people.

The governor said, on my part, I’ll continue to do what I know to be right for the people. I cannot betray my people”.

For the women drawn from across the three senatorial zone and the 31 local government areas of the state, their message was simple, they have come to reassure Governor Emmanuel that he remained the consensus candidate of the women of the state and as such there was nothing to fear.

Addressing the women, former Governor of Kano State and a PDP presidential Aspirant, Rabiu Kwakwanso told the women that they were lucky to have a man like Governor Emmanuel as Governor, adding that Emmanuel was a bridge builder, one who believes in a strong, united and developed Nigeria.

Kwakwanso was in the state to consult Governor Emmanuel on his presidential ambition. Impressed by the tumultuous crowd of women, Kwakwanso said, it was indicative of the Governor’s impressive performance in the state.