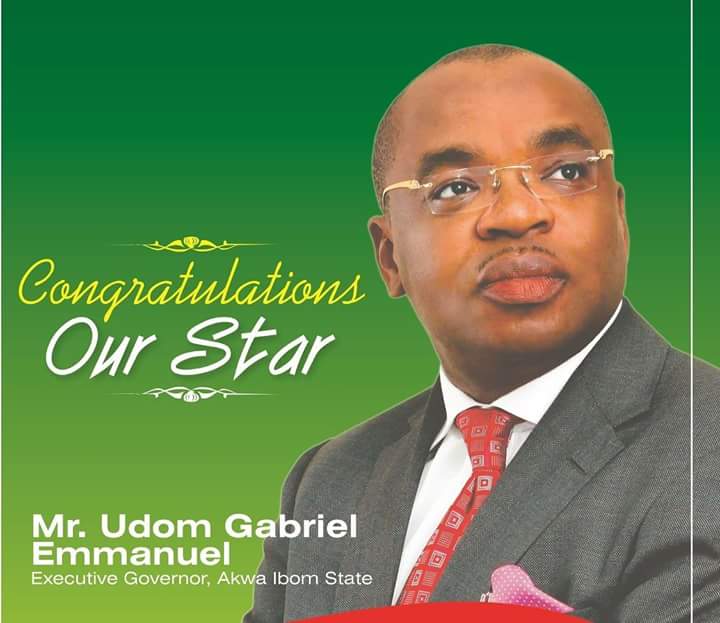 Not many could rise above partisanship to acknowledge the depth of knowledge and passion Governor Udom Emmanuel possesses as he rode to power in 2015.  But one Nigerian leader outside Akwa Ibom State who knew, and saw the future was the former Governor of Edo State. Comrade Adams oshiomhole during the economic summit in Abuja, not minding the political lines and divides, described Governor Udom Emmanuel as the best product of the Peoples Democratic Party in the current dispensation.

His assertion was like an adage my grand mum, Late Madam Catharine Philips Ikpe of blessed memory, once told me, that, the potency of a good herbal enema is known by the groaning of the patient, similarly, a husband who will be rich is known from the product of his brain. Mum also added that, the wobbling of a woman’s waist does give an accurate account of her productivity on bed, but a brilliant wife sends her husband to untimely daylight dream. Vintage.

Mr Adams Oshiomole saw what many could not see, some beclouded by hate and pessimism. He saw the future of Nigeria’s economy through Governor Udom Emmanuel. He knew Udom Emmanuel’s brain capacity and his honesty is capable of building a 21st century economy, where the Private sector will be a principal actor and the public sector will provide conducive environment and progressive policies.

Let me still go down memory lane. I recall in the build up to the last election. I and my colleague, Aniekeme Finbarr engaged in serious media fireworks to promote the candidacy of Mr Udom Emmanuel. As is the norm in politics in our clime,  we got so battered that giving up was an option. Such is the cost of good governance.  The irony is that many people who are today greater beneficiaries of the good governance called us names, rating us as mediocrities and hungry bootlickers. There is one example that never escapes my memory.  I remember a man who is now a protocol aide to the Governor telling Finbarr to go back and look for work , asking who he is and how much  he has benefited from Government before writing. The moral lesson is that we must fix our eyes on the ball and never waver in our convictions. We must not play politics with everything. There has to be some moments we must come to terms with reality and honest efforts.

Today, it would be grossly unfair to judge Governor Udom Emmanuel based on the myopia of a few who have refused to see the big picture. The irony is that some of them may end up being greater beneficiaries of these lofty plans of government. That is why I thank the Leadership newspaper for such a wonderful feat in making Gov Emmanuel the Governor of the year in acknowledgement of his contributions to the nation’s development. Governor Udom ranks among the best.

Just like people who had vision that was not a melodrama from a hallucinating mind , the vision of a Governor to be one of the best Governors ever in Akwa Ibom State , Nigeria and Africa at large has become a reality .

Today, through his honesty, Governor Udom Emmanuel has brought prudent management of resources and creation of private sector driven economy, through crafting of good policies and schemes that have attracted investors to the State .

Akwa Ibom State  was in need of  a leader who is not corrupt, and who will place people over his personal needs. In this world, to be competitive in all aspects, it demands radical socio-economic transformation and Udom with knowledge gathered in this field has ushered in the economic change. Akwa Ibom State needed a leader that has a vision for the State; one that can inspire the people, and one that can be bold to fight corruption, mismanagement of the State’s resources; and today to advantages of such leadership is seen everywhere .

Metering Company and Syringes and Hospital Equipment manufacturing company which will start production in May, establishment of Science Park , Granting of Scholarship to over 3000 student  to study professional courses both home and abroad . Free and compulsory Education from  primary school pupils and students in the secondary schools in the State, free medicare for Pregnant women , the elderly and children under five are also on the table.

On the agro-economy, the State Governor through AKEES is promoting  evolution in farming ,through  improved seedlings of vegetables , today Akwa Ibom State is no more importing tomatoes from Northern Nigeria , three Garri Mills are test running production  in three Senatorial Districts of the State.Etc

The achievements of Governor Udom Emmanuel in the past one year and nine months is what many would never believe that during this recession any Government in Nigeria can wrought such level of development because of paucity of funds .

We must continually elect people who have  passion and commitment for rapid development, as well as the well-being of the people and delivery of this kind of government.

Udom’s Government is confident, assertive, and innovative and committed to promoting and defending the interest of the people first.

Udom considers the people’s interest and development must be placed above our politics and personal gains, Governor Udom Emmanuel operates an open government that has integrity in its actions and projections.

Udom Emmanuel’s Government is accountable to the people and God, for he is not misusing  the wealth of the State as an astute financial manager . Good governance according to Downer (2000) is the process whereby public institutions conduct public affairs, manage public resources and guarantee the realization of human rights. Good governance accomplishes this in a manner essentially free of abuse and corruption, and with due regard for the rule of law and this is a clear conduct of Governor Udom Emmanuel administration.

When the Acting President , Prof Yemi Osibanjo visited Akwa Ibom State as part of his fact finding mission to the Niger Delta States, he described  Governor Udom Emmanuel as a development driven Leader . He did not make this commendation to earn a loot but his mind was overwhelmed by the level of development he saw on ground and commitment to do more by  the governor of Akwa Ibom State .

So the award of Governor Udom Emmanuel as the best Governor in Nigeria to me came late , a year ago his performance  had outwitted any governor presently in Nigeria as 250 km of road was completed and commissioned under  that period .

The Chairman of Leadership Holdings , the owners of leadership newspapers , Mr Sam Nda Isaiah described  Governor Emmanuel as a leader with profound tack record of honesty , transparency ,intelligent and above all, he has brought more development to his State in a short period of one year and nine months than any governor ever existed in Nigeria .

So today , I describe Deacon  Udom Emmanuel as the ‘Governor General’ of Nigeria,  a Governor of Governors.  A man delivering on his promises. All hail the man of honour , who doesn’t seek for glory but glory and honour chase after him through his good deeds. God bless Akwa Ibom State.