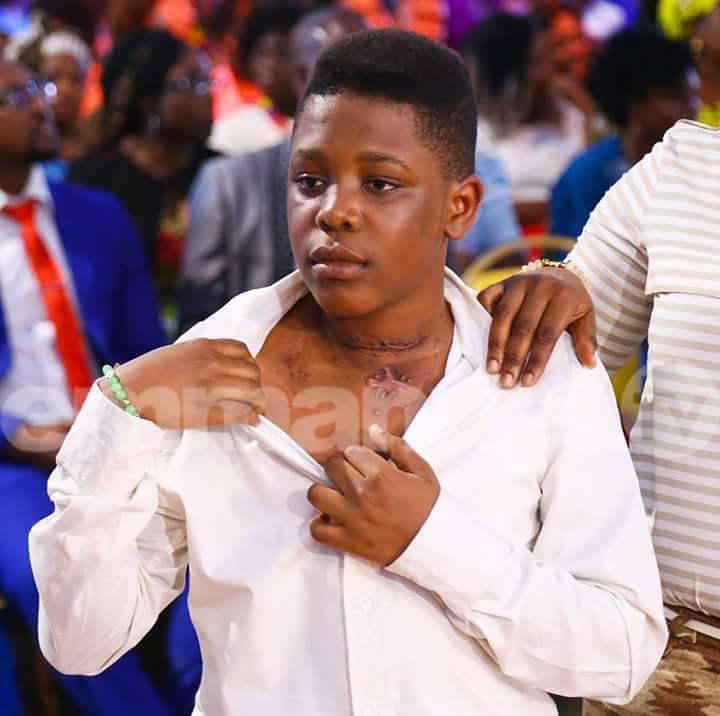 Sitting down in the evening to watch TV, the young family never knew it would be their last night together.  As the volume on their television suddenly increased, they looked up to find strangers inside their home, tying their hands and feet. In their presence, the intruders ate their dinner, drank and then began demanding for physical cash and ATM cards. The mother brought out all her worldly possessions but when it wasn’t enough, the armed robbers grabbed her 10-year-old daughter and, in a sudden movement, slit her throat. Provoked by her shouts of agony, they then grabbed the mother and raped her in front of her 12-year-old son. When he tried to intervene, the attackers slit his mother’s throat and began to stab the young boy. He was stabbed in his stomach and chest and his throat was slit. The armed robbers took the family’s possessions and made a run for it.

Left for dead and unable to move, the young boy Praise was surprised to see a white being take him up and deposit him to his neighbour’s doorstep. As he landed on the ground, the white being pounded the door and disappeared. The neighbor came to the door and saw Praise in a pool of blood. Shouting in horror, the neighbor rushed Praise to the hospital and subsequently informed his next of kin. He was literally dead on arrival. Coming in with the Morning Water and Morning Sticker, his aunt and uncle believed in God for a miracle. 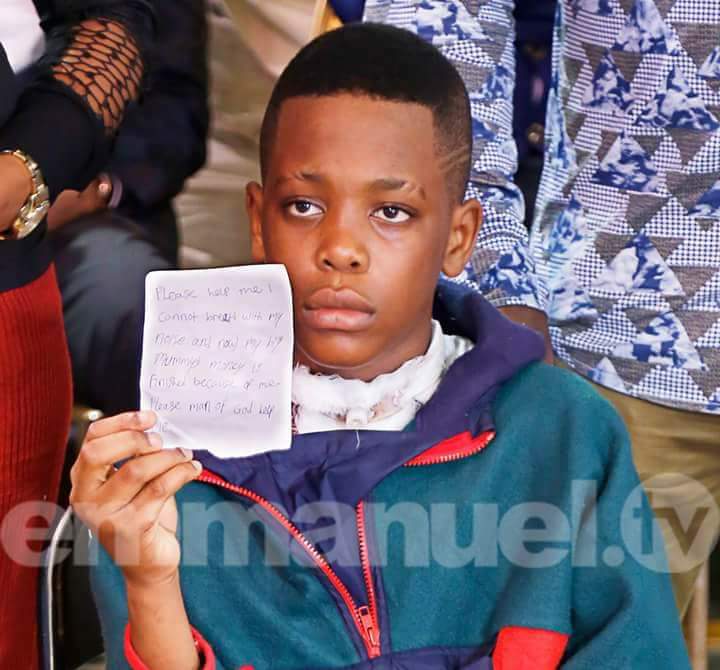 In the course of several months, seven operations were performed on Praise. His vocal cords had been severed in the attack and he could not breathe well or speak. If he wanted to communicate, he had to demonstrate or write it on a piece of paper. During three of the seven operations, Praise actually died and was revived time and again with prayers with the Morning Water. After the last operation in Nigeria, doctors referred him to the US for further treatment.

After hearing his story, the man of God Prophet T.B. Joshua provided shelter, feeding and clothing for Praise and his aunt Mabel while medical specialists were consulted for the referred operation abroad. Praise’s health began to improve while living in The SCOAN. Prophet T.B. Joshua helped them obtain international passports and visas and provided $5000 for the initial medical deposit, $2,000 for visas, passports and flight tickets and an additional $2,000 for their welfare while in South Africa. 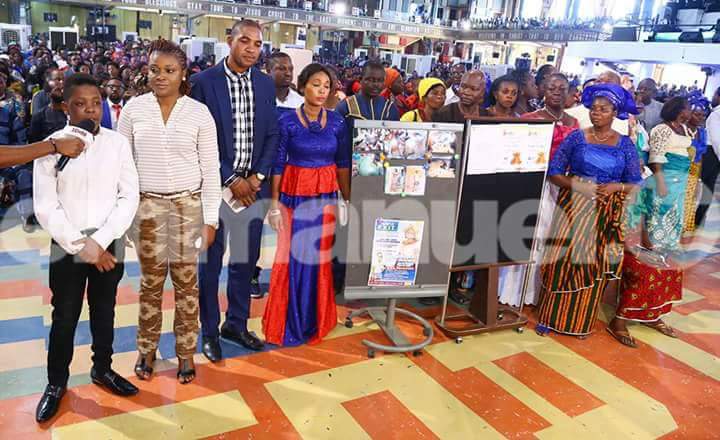 Flying for the first time, Praise and his aunt travelled to Johannesburg, South Africa and were welcomed by the Emmanuel TV Team who accompanied them to Cape Town where the specialized hospital is located. Providing transportation and accommodation within South Africa, Prophet T.B. Joshua sponsored all medical operations and procedures, totaling approximately US$40,000. 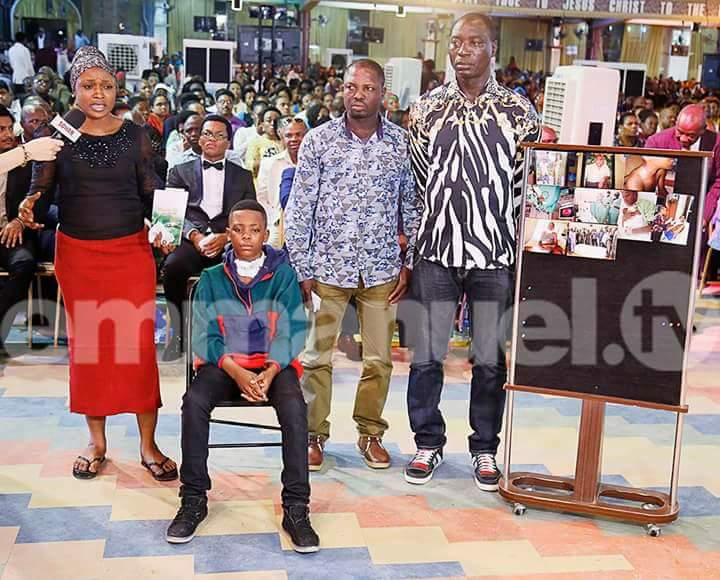 Miraculously, through prayer from Prophet T.B. Joshua and the ministration of the Morning Water, the vocal cords began functioning on their own!

After two months and several procedures, the pipe was removed from Praise’s throat and he was able to breathe and speak for the first time in nine months! Joyful to be part of such a successful process, the doctors declared him totally recovered.

Coming back to The SCOAN, a fully talking Praise and his aunt give glory to God for His hand of love, generosity and healing through Prophet T.B. Joshua.

Arriving at The SCOAN wearing a deep smile across his face, Praise’s walk into the Church got the entire congregation on their feet in standing ovation. In praise to the miracle working God we serve, they carried him on their shoulders to the altar. A living miracle and work of God, Praise is indeed an illustration of what God can do in our lives.

Recollecting the vicious attack that robbed him of his mother and young sister and clinically left him for dead in a pool of blood, 13-year old Praise testified for the goodness of God in his life. He recounted the attack in graphic detail. After the rape and murder of his mother and sister, Praise was cruelly stabbed and his throat was slit. With blood spewing from the deep cuts to his stomach and throat, the cold killers concluded they had accomplished their devilish mission and left with their loot.

Praise told the congregation that, feeling lifeless, he saw a whitish figure appear and lift him up. The unknown being then deposited him in front of their neighbour’s doorstep. Thereafter, the only thing he remembered was that he woke up in an intensive care unit in the hospital. Judith and her husband, the neighbours on whose doorstep Praise was deposited, said they heard a loud pounding on their door and were frightened by the loud bang. When they responded, they found Praise in a heavy pool of blood. The neighbour quickly tied his singlet on the cuts to exert pressure and slow the flow of blood.

Judith’s husband recalled that when he arrived in the neighbourhood the night of the incident, he did notice that Praise’s gate had been left ajar with the sound blaring at loud levels. He never felt it was unusual to hear a loud music coming from his neighbour’s house, for they sometimes played the music loud. It was after they found Praise in that situation that they knew something horrific may have happened to Praise’s mother and young sister. The neighbours rushed Praise to the nearest police station to report the matter, after which the pregnant Judith was asked to proceed to the hospital with the wounded child and her husband asked to wait behind at the police station to recount what had happened to culminate in Praise’s near death situation. It was at that point that they started calling Praise’s next of kin and other family members to inform them about the situation. In the aftermath of the shock she experienced, Judith lost her advanced stage pregnancy.

After enduring seven major surgical operations in Nigeria, doctors agreed it would be best if Praise was flown to the United States to seek further treatment that could both help restore his voice and alleviate complications in the aftermath of the series of operations he had undergone. Whilst nursing his physical and emotional pain, Praise left the hospital at one point to join mourners in laying to rest the mortal remains of his mother.

The family sought financial assistance here and there for further treatment, without any luck in sight. Having exhausted their search, the family called a family friend for help. He told them there was only one solution he knew of – prayer from Prophet T.B. Joshua at The SCOAN.

Arriving at the church, they explained their situation to the evangelists who reported to Prophet T.B. Joshua. Reaching out in compassion and generosity, Prophet T.B. Joshua housed the young man and his aunt while they searched for a state-of-the-art hospital overseas for Praise’s treatment. Locating world-renowned surgeons, Prophet T.B. Joshua sponsored the two to South Africa and paid for their passports, visas, flight tickets, accommodation, feeding and welfare as they stayed for the treatment.

All assistance, including all further medical operations in South Africa to repair the damage to his throat and restore his lost voice were likewise paid for by Prophet T.B. Joshua and the Emmanuel TV Partners, to the amount of US$50,000.

During the two months they were in South Africa, Praise continued to pray along with Prophet T.B. Joshua on Emmanuel TV and his aunt continued to minister the Morning Water on him in prayer every day, especially on his surgery days.

Praise’s miraculously speedy recovery is in itself a proof that our God is able and indeed a God who makes impossibilities possible. Praise’s paternal grandmother, maternal aunt, neighbours and other extended family members, who also shed more light on the gruesome multiple murders and the vicious knife attack on Praise, came along to The SCOAN to praise, appreciate and thank God for what He has done in the life of Praise.

Cracking jokes and imitating various voices to demonstrate his permanent healing, Praise showcased two Certificates of Bravery he received from the two renowned surgeons. He also brought out the two pipes that had once been inserted in his throat and threw them away, stating that he no longer needed any assistance to breathe.

“Those who are rich in society, help the poor and the sick. Imitate the man of God, Prophet T.B. Joshua,” said Praise, in advising the congregation and viewers all over the world.

Just like Lazarus, Praise has been resurrected through the grace of our Lord, Jesus Christ.