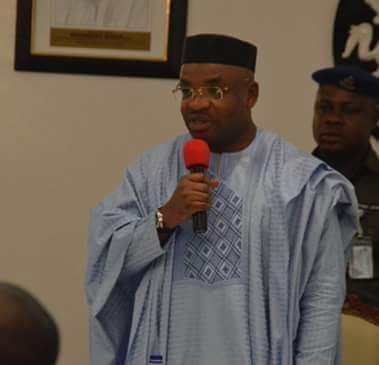 Breaking…
THE DISSOLUTION OF AKWA IBOM STATE  EXECUTIVE COUNCIL BY HIS EXCELLENCY MR UDOM GABRIEL EMMANUEL.
Abasiubong Tom
Let me use this opportunity to Congratulates those gentlemen who have had the opportunity to serve the State at that capacity.
To whom much was given, much was also was also expected even though some had perform much more below expectation while very few were generals in their job.
The result or the score card will speak volumes whether one will be retain or send parking.
The much expectations from His Excellency is at the top gear. I personally will expect his Excellency to take total control of his cabinet and steer the steering of governance without being influenced by any external forces.
I will also expect the new Exco to be selected among the foot soldiers that work tooth and nail to the success of the *Devine mandate* not necessarily Lagos based who don’t even have the voters card neither do they knows the name of their Ward Chairman nor knows the road to their root or village…
We need men in the Exco who can win election in their respective units without influencing anyone through any form of inducement or the use of force..
Your Excellency Sir, please let off those who never perform and retain those that knows their job… We, the masses are solidly behind you.