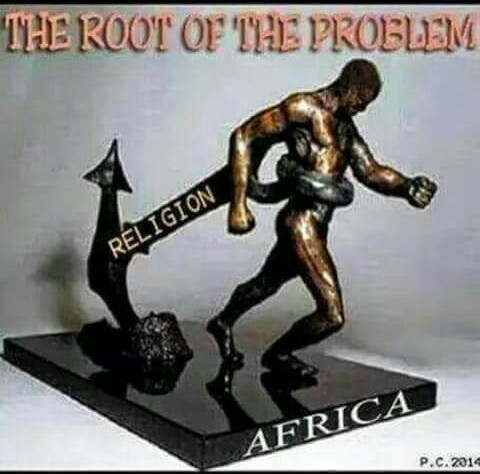 It has been over five decades since the geographical entity called Nigeria was birthed. But sadly, one can not outrightly, since then, point to a direction or a course of development which she has set to follow.

This is so because from the eve of Nigeria’s independence to date, the country has hardly enjoyed internal peace; from its inception as a colonial state, Nigeria has faced   perennial crises of territorial or state legitimacy which have often challenged its effort at national cohesion, democratisation, stability, economic transformation and development. Sadly, as hydra headed as it gets, one has not been able to properly figure out the sources to these troubles, hence difficult to troubleshiot.

But if anyone cares to observe, one of the primary social maladies inciting these troubles, thus inundating Nigeria’s match to greatness and development is the big monster called RELIGION.   The relationship between religion and society has always been symbiotic and inseparable, and holds sway the essence of human existence. Precisely, every human creature is a religious being.

The deepest religious experiences are those connected with birth, marriage and death and these are often referred to as the ‘Crisis of existence’ by philosophers, thus making religion man’s inescapable imperative.  One spectacular feature of religion is its certain degree of affinity to man’s social needs, experience and moral community.

Be that as it may, religion in Nigeria is truly, in the Marxist view of it, the opium of the Nigerian masses, which has defied its true definition as a system established with divine direction to enable man worship God and acknowledge His overriding power and supremacy over nature and the entire universe He created. Alas, as far as Nigeria is concerned, one cannot say, with precision,  what religion stands for; but a closer squint at it would reveal that religion in Nigeria stands for a cynosure  of socio-political strife and social-cum-national disintegration.

It should be known that religious harmony in Nigeria had remained an illusive phenomenon but with a devastating effects. Religious strife in the country has affected negatively the political, economical and the social environment which are the indices for national development. The Most exacerbating phenomenon is the ideological warp out of the citizenry occasioned by religion-driven combat fatigue.

The continuous killings and destruction of properties of economic values and infrastructures and social amenities that would have churned out benefits from economies of scale; the running aground of economic activities by a series of religious strife, leaving people stranded, jobless, homeless is suffice to define the height of havoc wrecked on the development of Nigerian economy by religion.

Business and investors have left the Nigerian shores  for threat if religious strife, depriving government millions of tax revenue. In effect, the government is left with two options:  diversion of mony left for development of the country to improvement of living standard of the masses, and borrowing to rebuild war torn zones, which on a long run, tantamount to odious debt.

The two major religious sects in Nigeria – Christianity and Islam – have caused Nigeria adversary and misery beyond words and have been at logger-heads for almost a millennium. The two religions have undermined the traditional moral theology without effectively replacing it.  But it should be borne in mind that as a consequence of religious disharmony, deeply divided state tends more to be fragile and unstable because, almost by definition, there are fewer points of divergent and consensus amongst the constituents groups that are required to effectively mitigate or contend the centrifugal forces that tear the society apart.   Thus, given the trending economic quagmire and infrastructural malaise, religious disharmony has remained a difficult hurdle from forging a developmental path in Nigeria.

Therefore a need for religious revolution should be appreciated and accepted as a goldmine that must be given a serious attention and respect it deserves.  For successful social and economic revolutions, Nigeria clearly needs well-defined and accepted ethical values based on socio-economic and socio-political practices on the doctrine of love and selfless services, which are enshrined in the Holy Bible and Holy Koran, and are practiced in the traditions and religious culture of Africa.

This revolutionary match might be herculean task for extremist Christians and Muslims. It is of no doubt that religious extremism is caused by fanaticism, and so the element of fanaticism needs be, first of all, expunged from the system of things in these two monotheistic universe to allow for liberality of the minds. This will be a key function vested on the Imams and the Priests as they render their exhortations.

Christians and Muslims should no longer direct their crusades and jihads against one another, but should direct them jointly or corporately against the poverty and suffering of the children and followers of one true creator (Allah or God) whom they believe and worship. The strategy to this revolutionary strife will be that:  These two religions will identify the many things that unite them and seek to emphasize those things, while seeking on the other hand, to de-emphasize the few things that tear them apart in the spirit of mutual tolerance.

In the early middle age, most of secular Europe, including the feudal leadership, was illiterate, or at best barely literate. The religious leadership was mainly educated and played key roles in governance. The churches organized schools and laid down ethical principle for both religious and public-private conduct. They modified the Greece-Roman and barbarian ethics of Europe. People gradually learnt to inter-relate accordingly in service to God, to their fellow men and to their country.

The Islamic movement played a similar, even stronger role in the Middle East and other parts of Asia. One should be marveled at the way in which Christianity and Islam influenced the socioeconomic and cultural fabrics of those parts of Europe over-run by revolutionary Marxism-Leninism.

How they managed to survive the adverse pressure of atheistic communist government for nearly a century. Nothing can demonstrate the strength and depth of those influences more clearly. Similarly, Christian and Muslim ideals can be made to determine and influence effectively the socioeconomic and political life of black Africa and other black majority countries.

And the religious revolution cannot take place without the enthronement of these ideals. (Please if this was lifted from another book, acknowledge the book and author)   I am calling on religious pundits to revive and re-entrench those already existing but suffocated ideals in the various religious communities, and to do away with fanaticism in mutual respect for each other.

The element of infidel in Islamic religion and the element of unbeliever in Christianity, should be put aside, leaving it for God to decide on judgment day!. We should see ourselves as brothers – not for sake of religion but for the sake of one creator, one skin colour and one continent. Religion should not come to tear us apart, but unite us. Our brotherhood should not be measured on a religious but humanitarian scale.

It is necessary to note here that before the coming of Christianity, and European colonial rule, African Traditional Religion played the same role in our socio-economic and political life as did Christianity in Europe and Islam in Asia. And now after more than a century of Christianity, public conducts and sense of value in African societies are not to any great extent affected by African ideals and principles.

Islam has lasted even longer, but Islamic ideals have not influenced public conduct any better. “We should see ourselves as brothers – not for the sake of religion, but for the sake of one creator, one skin colour and one continent. Religion should not come to tear us apart, but unite us. Our brotherhood should not be measured on a religious but humanitarian scale.

One important caveat must be stated here. The followers of the two global religions must show adequate recognition of the equality of humanity. They must proclaim the equality of the Black man in religious canons and practices based on the principles of the Second Council of Jerusalem, which both religions acknowledge as valid.