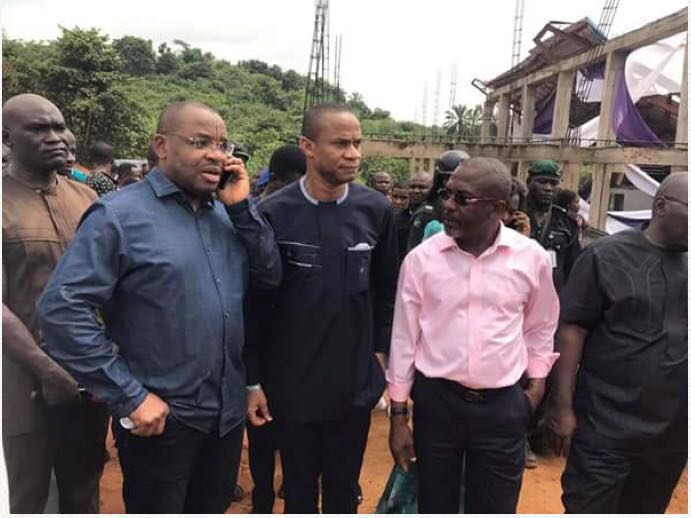 PRAY FOR VICTIMS OF THE COLLAPSE BUILDING AND AVOID NEGATIVE COMMENTS, Gov Emmanuel

Governor Udom Emmanuel has urged Akwa Ibom people to continue praying for the families of the deceased worshippers of the Reigners Church building collapse and refrain from negative comments that  can further injure the emotions of the bereaved families.

Speaking during the Sunday service at Qua Iboe Church, Ikot Ekpene road, Uyo, Governor Emmanuel  said he specifically called for the two days of mourning for special prayers in memory of the departed faithful and for prayers to enable to enable the quick recovery of the injured ones.

The mourning would climax with a special prayer session at the Government House Banquet Hall on Monday by 4pm.

The governor, cladded in an all dark suit, refrained from giving the official figure on the casualties, explaining that even if it was a single life, it was still a significant loss to the state.

“I have hired several surgeons from around the country and they are arriving the state in their numbers to help in the treatment of the injured worshippers.

He reminded the church that he had a covenant with God that no member of his executive would lose his life in service, saying that it was the mighty Hand of God that brought him and his lieutenants out alive.

He enjoined Akwa Ibom people to inculcate a habit of always praising God for the gift of life, pointing out that only in times of crises that people remember God.

Governor Emmanuel said accidents are unforeseen situations that could happen anywhere, and warned people against appropriating blames from uninformed perspectives.

We are running an inclusive government and I am surprised people are asking me why we went to the church, if I don’t go to church, should I be going to the shrine? I am a covenant child and my arrival in the state was not an ambition but for a purpose,” he said.

He used the occasion to express the condolences of President Muhammadu Buhari to the people of the state on the unfortunate loss of lives.

The Governor later made another round of visit to the victims in the hospitals.