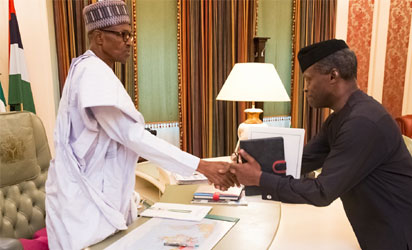 Fresh facts pointing to a vicious power struggle between political leaders in the Southwest and the famed cabal in the presidency have emerged. The face-off between the two power blocs according to Saturday Vanguard findings may have been responsible for the controversy that trailed the letter to the National Assembly by President Muhammadu Buhari of his medical vacation.

President Buhari had in the letter unusually asserted that Vice President Yemi Osinbajo would coordinate the affairs of the government in his absence, a phrase that threw up dissension in the Senate

Besides, Saturday Vanguard has learnt how Buhari made last minute efforts to reassure polity hours before he departed for his medical vacation last Sunday.

Though Buhari and Osinbajo are mentioned and cited as pawns in the power struggle between the presidency cabal and the Southwest, Saturday Vanguard, nevertheless confirmed that the two men are tangential and if not, far removed from the aim of the power players who are apparently using the two men to advance their political interests. Both president and vice-president according to presidency sources have continued to hold unflinching trust in one another despite the machinations of those around them.

The faceoff it was learnt deepened while President Buhari was out on his third medical vacation between January and March when Osinbajo escalated the pace of government. In that period of acting, when Osinbajo went to different and far out places in the country to bring calm, his efforts were said to have been misinterpreted by some who saw it as an effort in political promotion.

While the development was welcomed, some associates of the president were said to have seen the effort of the vice-president as a threat, not directly to Buhari, but to their influence in the government. Two leading agents of the presidency cabal, including a former ambassador and national party chairman and a top businessman, were said to be at the top of the stop Osinbajo project carrying their campaign to meet the president in London.

Many were taken aback that Osinbajo who during Buhari’s absence between January and March was all about the country, did not leave Abuja for the first two weeks after the president returned to the country last March.

However, the efforts of the cabal in fencing out the public from news about the state of health of the president in the last few weeks, however, did not help matters as it stoked tension and concern about the condition of the president.

Nevertheless, the May Day intervention of the foundation chairman of the All Progressives Congress, APC, Chief Bisi Akande, was, however, seen as an overkill.

The cabal it was gathered, was jolted by the May Day caution from Akande urging those around the president not to derail the country’s democracy by their efforts to safeguard selfish political interest at the cost of the nation.

“The greatest danger, however, is for political interests at the corridor of power attempting to feast on the health of Mr. President in a dangerous manner that may aggravate the problems between the executive and the national assembly without realising if, in the end, it could drag the entire country into avoidable doom,” Akande had warned.

The presidency cabal was said to have seen the statement as a direct affront and an attempt by the Southwest to stampede the president to hand over power to Osinbajo. “There is a trust issue, it was that trust issue that was carried over to the letter,” a source privy to the developments informed Saturday Vanguard.

“The president could have written a letter to the National Assembly that Osinbajo would act indefinitely until he returns, but then they decided to play with words,” the same source said.

Another source also speaking on the condition of anonymity said that the cabal might have decided to test the waters by muddling the letter to the National Assembly. Those doing these things are the enforcers, people who have associated with Buhari or those he allows to do his work for him.

“Buhari is surrounded by people that they call enforcers,” a source said referring to associates of the president in formal and informal positions who help to enforce what they believe is to his interest and their own interest.

As a military leader, he had Tunde Idiagbon and some others acting in private capacity who remain even still powerful in his present government. “His style has not changed,” one political source close to the functions of the presidency said.

Meanwhile, despite his poor health condition, Saturday Vanguard learnt that President Buhari made strong efforts before departing the country to London last Sunday to reassure the various operators of the system of government.

Before leaving, the president first met with the President of the Senate, Senator Bukola Saraki who subsequently returned with Speaker Yakubu Dogara of the House of Representatives and Governor Abdulazziz Yari, the chairman of the Nigerian Governors Forum. The import of the meeting a source said was to reassure the various operatives of government that the government was in good shape.

“You can imagine if the president did not see them and take that picture, you could have imagined what some would have been saying by now; and that the president was carried out in a stretcher or something like that,” the source revealed.