Member representing Esit Eket/Ibeno State Constituency in the Akwa Ibom State House of Assembly, Rt Hon Usoro Akpanusoh has reiterated commitment to continue to give people of his constituency effective representation and bring the dividend of democracy to the people if elected for a second term.

Mr. Akpanusoh made this position when he played host to Ward 5 & Ward 6 Executive of the Peoples Democratic Party from Esit Eket local government area. Akpanusoh who is the Chairman, Appropriations Committee in the State Assembly said he will end at nothing to ensure that the people of his constituency feel the impact of his representation. 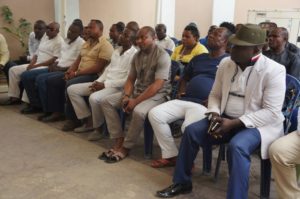 Commending the party Executive of the two Wards for their support during his election into the House of Assembly in 2015, he urged them to be more supportive for his second term bid as he has not betrayed the trust they bestowed on him, promising to do more when given a sedond mandate.

Mr. Akpanusoh frowned at the actions of some Ward Officers of the party during the last concluded local government election where some of them were engaged in anti-party activities by working with opposition, warning that the party is keeping watch on the activities of all its members.

“Those that are in the party and you are not loyal to the party, people are watching you. He continued that he remain a very committed member of the Peoples Democratic Party and do not have any thought of leaving the party at any point in time. 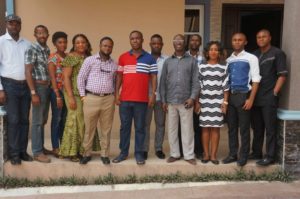 “It is not in my thinking and I have never thought of leaving the Peoples Democratic Party. You need to be very sincere while politicking because sincerity has brought me to where I am today,” he submitted.
The House of Assembly Member also encouraged his people to continue to support Governor Udom Emmanuel administration as he has good plan for the people of the area, listing some roads that have been awarded by the governor which work will commenced in earnest.

Mr. Akpanusoh urged members of his constituency to come out enmasse to participate in the Voters Registration Exercise, pledging his total support to ensure that the exercise is very successful in his constituency.

Responding, the leader of the delegation and Council Secretary, Comrade Felix Udoh said that Usoro Akpanusoh has represented the State Constituency well and deserves a sedond term in office. He said, “we are opportuned to have Usoro Akpanusoh as our House Member. He has represented us very well. We will give him the necessary support to succeed for sedond term.” Comrade Udoh added that, “there is nobody I have ever supported that will not win.”

Others who spoke at the visit lauded the outstanding representation of Mr. Usoro Akpanusoh as second to none, pleading that he should extend his empowerment programme to include members of the Ward Executive and Chapter Officers who were physically on ground to work for his success at the poll during the 2015 general elections.

A motion for the adoption of Governor Udom Emmanuel and Usoro Akpanusoh for second term bid was moved by Mr. Imoh Sunday Bassey and duly sedonded by Mrs. Comfort Aniei which was unanimously adopted by all present at the visit.
In the delegation was PDP Chapter Legal Adviser, Barr Christian Tom and other Chapter Officers.