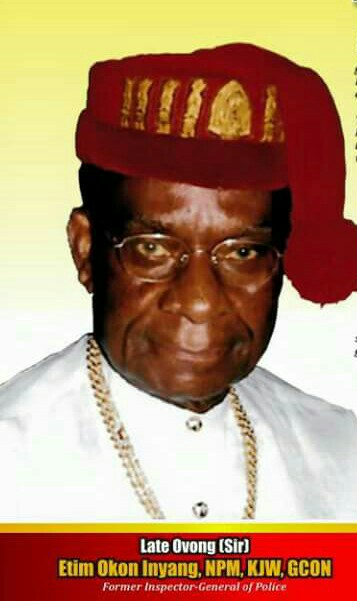 The Governor’s Address
MY ADDRESS AT THE FUNERAL OF LATE ETIM O. INYANG, (GCON, NPM, KSM), THE 6th INSPECTOR GENERAL OF POLICE, ENWANG STADIUM, MBO LOCAL GOVERNMENT AREA, NOVEMBER 26, 2016.
PROTOCOL
EXIT OF AN ILLUSTRIOUS SON
Fellow Nigerians,
We are gathered here today to celebrate a quintessential Nigerian, a great patriot, bridge-builder and a man of Christian masculinity, forbearance and peace. We are gathered here today to honour the memory of a man who epitomised the “Can-do” spirit which forms the definitional layers of the Akwa Ibom identity- a spirit that stares challenges in the face, and instead of being overwhelmed, would rather rise to the occasion, and claim the fate of greatness which God Almighty has embedded in us all.

We are gathered here today to celebrate the man who in his life of great achievements represented one of the core values of our “dakkada” philosophy- the belief in the endless possibilities that lie ahead of us all, and the need to strive to appropriate those possibilities in spite of the odds and limitations we may encounter in the course of march to pursuing these ideals.

The Late Sir Etim Okon Inyang-(KSM, NPM, GCON) the 6th Inspector General of Police-December 1983-October 1986 life could be summed up in one sentence: A man of uncommon determination, faith, hard work, compassion honesty and transparency. These endearing qualities were the guiding ethos of his life, and in every station of his life’s odyssey, they stood out like shining stars.
Born on December 25, 1930, the Birthday of Jesus Christ, he moulded his life along Christian ethics and this key quality saw him march gingerly through the many pot holes and zig -zags that dotted the path of his greatness and success.
He lost his father at an early age, and that temporarily doused the fire of his academic pursuits and curiosity, but he was undaunted. He knew he had something to offer to the world; he knew he had certain values he wanted to add to the human enterprise, he could have retreated into a little corner and engage in pity party, but he rose to the occasion, and saw a future in law enforcement and the infinite belief that he would excel and exceed expectations, and this, he did with dare and dash.
When he joined the Police Force on October 1, 1949, as a recruit, he didn’t know that 34 years later, he would be appointed the Inspector General of Police- the highest point of achievement in the Force.
It’s not too often that one gets to such heights having started from the lowest rung of the ladder. There must have been something in our late IGP that others whom God had positioned as his destiny helpers saw in him, and those values are not far-fetched.

Here lies a man who was honest, trustworthy, dependable and imbued with deep Christian values of love and good will towards all- a man who harboured no ill -will towards his compatriots or others who came in contact with him, a thorough-bred professional who fought crime with a human face, a community leader who realized that even though his constituency was national, he was first and foremost a proud son of Enwang, and had an abiding responsibility to affect and effect developmental strides within the community.
As we wish him eternal farewell today, let us all be inspired by his life of selfless service, his compassion, his innate belief in the capacity to rise and shine even in the face of great odds, his deep love for his nation and his state, the humility he exuded and his faith and belief in the goodness inherent in the human nature.

To his dear wife, Mary and his five children, I urge you to live according to the virtues that your husband, father and patriarch exhibited- virtues that have made it possible for the whole national security community to be present here to bid fare well to this great crime fighter and nationalist.
To the people of Oro Nation, I urge you to be consoled by the fact that your son and our son did us all proud. His contributions toward peaceful co-existence and developments of the Oro Nation and Akwa Ibom State in general are worthy of emulation and this legacy shall remain indelible in our memories.
Let me conclude by stating here that we will always be inspired and encouraged by the forthright life of our dear departed IGP, Sir Etim Okon Inyang, (GCON, KSM, NPM) the Ovong of Oro Nation, an all-round good man, the Ambassador of our state, a great and internationally recognised crime fighter. Esire ooo Ete. May your great soul find sweet repose in the bosom of our creator, till we meet to part no more-Amen.