Governor Udom Emmanuel has expressed the belief that in view of the strategic importance of Akwa Ibom and the huge economic benefits from its maritime sector,the proposed Naval War College in the state will soon be realised.

Governor Emmanuel stated this when he played host to a delegation of Course 1 of the Naval War College of Nigeria, Ubima, Rivers State, at Government House, Uyo. 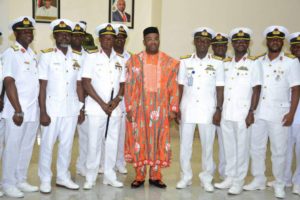 He lauded the theme of the tour, “combating maritime security challenges towards socio-economic development” and hoped that their tour of the shoreline of the state will help in fighting security threats and ensuring the growth of economic life of the coastal areas.

“we have a whole lot of foreign investors who have indicated interest to develop those shorelines, starting from logistics to petrochemical plants, refineries and fertilizer plants,” adding that with assurances of adequate security presence, their zeal to invest will be boosted.

He said the commencement of the war college in Rivers state meant that Akwa Ibom is inching closer to having its soon.

Akwa Ibom, he insisted, has the longest shoreline in the whole country, and from the shoreline comes the largest quantity of crude oil which is being exported on a daily basis from the country.

For these reasons, he maintained that, if the country had needs for 2 – 3 war colleges, the state with the longest shoreline should be one of them.
“Nigeria’s investments is greatest in our shoreline; so we need the naval protection more than any other place.”

He expressed hope that the visit would spur the Nigerian navy to commence the college sooner.

On the new Naval Technical College in Ekparakwa, Mr Emmanuel said he was expecting an invitation to address the first set of students in the college.

He said his reluctance to visit the college now was borne out of his desire to speak directly to students once they start classes, instead of visiting to see just the structures in the school.

He said the Nigerian Army had carried out aptitude tests for their command secondary school in Efa, Etinan local government, and urged the naval college to follow suit.

Commending the synergy among the armed forces in the country, he also encouraged them to continue doing their best for the sake of the country, despite the limited resources within reach.