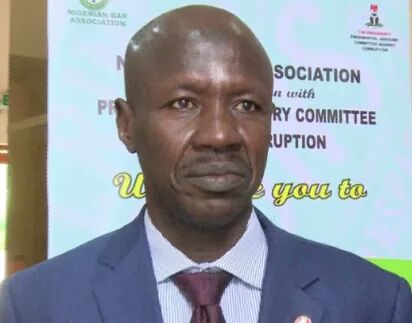 *As AGF directs he hands over to Director, Operations

The Acting Chairman of the Economic and Financial Crimes Commission (EFCC), Ibrahim Magu, may have finally been removed from office.

A source close to The Guardian said his redeployment back to Nigerian Police Force (NPF) was to pave way for a fresh person to be presented by President Muhammadu Buhari as the nominee to head the anti-graft agency before the Senate.

The Guardian gathered to make the situation look like a routine exercise, some senior Police officers would be re-deployed by the Police hierarchy to resume as conventional Police officers.

It was equally reliably gathered yesterday that the Attorney General of the Federation (AGF) and Minister of Justice, Abubakar Malami, has already issued a leter to Magu on the development and directed that he hands over to the Director of Operations in the Commission.

Magu’s nomination was recently rejected by the Senate following allegation of graft levelled against him by the Department of State Security Service (DSS).