Two chieftains of the All Progressives Congress from Esit Eket and former House of Representatives Members, Hon. Eseme Eyiboh and Hon Bassey Dan Abia Jnr, were among eminent personalities that joined the youths of Akwa Ibom to seek God’s face for the continuous success of Governor Udom Emmanuel’s administration till 2023.

Barr. Abia and Eyiboh who both departed from PDP in 2016, showed rare communal spirits by identifying with the youths who gathered to pray for sustained peace in the state and the re-election of their Grand Patron Governor Emmanuel in 2019. 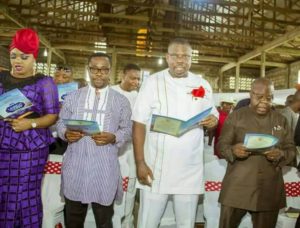 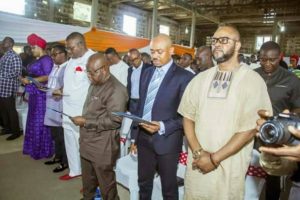 The highly spiritual confirmation service at the Apostolic Church, Akpambiet, Edo in Esit Eket local government area was the monthly Youth Prayer Conference organised by the office of the SA to the Governor on Youth matters, Comrade Aniefiok Iwaudofa in collaboration with youth leaders and village youth presidents across the 31 LGA.

In his remarks, Governor Udom Emmanuel who was ably represented by his Honorary Special Adviser on Special Duties Rt. Hon. Okpolupm Ette, advised youths to embrace development and shun acts inimical to their future.

While acknowledging the effect of prayers in changing the methods, the Governor’s representative said it was impossible for the prayers to work if the people are not armed with voter’s card needed for the opinions to be registered.

He said with the absence of a national census exercise in the country in the last decade, and the near impossibility of any soon, it was pertinent that voters registers are being used to by as the national statistics for development plans in the country.

The Governor urged the church leadership to remain fervent in prayers and called for an enabling environment that will help attract investors to invest in the area for youths to be gainfully employed.

In his message, Apostle Anwafiah S. Akpaekong advised youths to develop new methods in striving for success, maintaining that anyone who fails to seek God’s face in his endeavours was bound to fail.

Apostle Akpaekong while reading from the book of Luke 5:1, commended Governor Udom Emmanuel for changing the method of governance by incorporating youths into governance and showing them the way to God.
In an opening remarks, Mr. Aniefiok Iwaudofa; SA Youth matters said that the resolution of the youth to seek the face of God is spurred by their determination to embrace God and to partner spiritually in supporting the administration of Governor Udom.

He commended Governor Udom for retooling the youths from instrument of peril to instrument of good governance and leadership which result have guaranteed peaceful coexistence in the State.

Addressing the mammoth crowd, the political leader of Esit Eket, Elder Benjamin Udobia thanked the Governor and the leadership of the Party for allowing prayer to take the lead in the affairs of governance.

Elder Ben Udobia applauded the Comrade Iwaudofia on his pragmatic performance in exhibiting rare exemplary leadership style in the course of strategizing and drumming support for Mr. Udom Emmanuel.

The political leader who also is the deputy director general of the Divine Mandate campaign Organization urged youths to change positively for the betterment of all indigenes and residents in the area.

He appealed to churches to intensify campaigns for members to register and get their PVCs which he said is the only panacea in changing the method of governance.

Comrade Enobong Harry the state PDP youth leader, in his goodwill message assured that the leadership of the youths in the State is firmly working to propagate the policies and programmes of the Governor and uphold dignity among the youths.

Speaking also, Dr. Usoro Akpanusoh who represents Esit Eket and Ibeno in the House of Assembly while addressing the congregation thanked the Governor on his sincerity of character by working to fulfil on the campaign promises made to the people of Esit Eket.

Akpanusoh; who is the Chairman appropriations and finance committee in the sixth Assembly informed that work will soon commence on the road projects awarded in Esit Eket by the Governor and seized the opportunity to announce to the people his constituency empowerment scheme scheduled to hold on the 9th of April 2019.

The lawmaker however reaffirmed his total loyalty to the political leader, Elder Benjamin Udobia and the leadership of the PDP.

Also speaking, the chairman of Esit Eket Hon. Iniobong Robson applauded the Governor for exhibiting highest level of dexterity in empowering youths and in developing the State.

Mr. Robson while thanking the Governor for the award of 14.8km road construction in Esit Eket told the congregation that the impact of Governor Udom Emmanuel can be attested to with genuine facts.