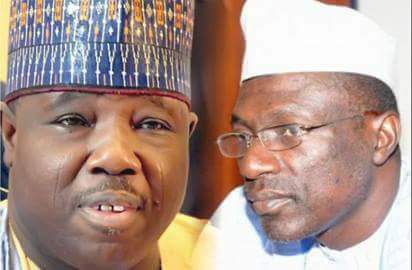 According to Aristotle”we are all political animals” that is why directly or indirectly we have to get involve in political activities,literally or in the actual sense.

I did not want to write anything personally on the Sheriff’s victory yesterday at the court of Appeal, but am tempted to,because I love political discussions as a historian, and I did it even with my lecturers while in school. Sometimes after classes,on spare times, and am always excited.

Let me say hello to my late Professor of history, Prof Monday Abasiattai,though gone, but my discussions with him on issues will remain fresh in my mind,especially when he taught me the history of South Africa from 1800 to the present as at then,and the different politics in between. I also remember my political gist with Dr Udida,Dr kokoette Ina,who till today irrespective of his age,still discusses real politics, and everywhere around him is book here newspaper there.

On the Sheriff and the PDP issues, without sounding sarcastic, from the look of things, Sheriff has taken over the party, and Will remain the recognized National Chairman of the party,until the supreme ruling,were the Makarfi faction will approach.  It is not my pleasure to say that, because I was against Sheriff from the start, but those who thought PDP was then under their control decided to do otherwise,by bringing in this man.

Let us look at it this way,the court that use to rule in favour of Sheriff was in Lagos, while that of Makarfi was in Port Harcourt,the two controversial Judges were redeployed, now Sheriff left Lagos down to Port Harcourt and got victory over Makarfi’s faction,what does this mean? Well, looking at the Sheriff character, who has all his life in politics been very controversial, he will not want this to go away, and this is killing the party.

Infact, he does not care even if he becomes the chairman of an empty party. But is the empty party likely?. It is really a pity that Sheriff could come in from ANPP under a controversial grounds and stand to hide under Jonathan, against his prosecution for terrorist activities and his rumored link then, with Boko Haram ,which he denied the allegations as untrue,to snatched away PDP. Is Sheriff coming into PDP a curse or a blessing?.
When he was brought in as the National Chairman,who and who were in attendance ,and what let to his emergence?.

Sometimes am always tempted to think that few factors may have placed PDP where it is now,though I stand to be corrected. An earliest factor to me,could be traced back to the Late ya’radu’s health and the tension that mounted on bringing in former President Jonathan to power,were some Governors in PDP even in South South were he hails from had fought to oppose him.

Since such things is seen as interest in politics, the then tension and anxiety was over,some people who oppose him came to work with him,but some wounds were not healed,some people were betrayed along the road,while others went behind to write their names in the good book of Jonathan,others were left stranded and seen as Judas.

Another issue or factor could be the problem in the NGF,were 16 was said to be greater than 19,hence the beginning of a new level of conspiracy ,putting River State and Plauteu state at the centre. Splitting Governors,Minister,Senators,chairmen,ladies and gentlemen into factions.

Obasanjo opted out and rain storms, by bringing in a conspiracy of the single term game, were he insisted that, while campaigning for Jonathan, he promised the North that he was not going for a second term, but he Jonathan decided to go behind his back to get endorsement from people and organizations from different quarters.

This conspiracy was further expanded when Dr Jonathan was said to have been in Romance with H E Gbenga Daniel, making kashamu who is now a senator ,the leader of PDP in the west,while Obasanjo was still in the party. Later on as the conspiracy kept going,Obasanjo through his controversial open letter to Jonathan ” BEFORE IS TOO LATE”,spoke his mind in a way,some people viewed as not being patriotic, while others applauded his sincerity.

Was Obasanjo’s letter and his subsequent destroying of his party membership card in the public another factor?

After chief Obasanjo destroyed his party membership card, he left the party literally, this gave a picture of the party and it shown to all that it was not well in the party.
Obasanjo leaving the party, some said he left with the party’s glory,and whatever influence the party had,and his supporters.

This off course made some Governors to visit the former president at his home at Ogun state, to kneel and beg him,but he still remained adamant. Is Obasanjo a founding member of PDP? Let us go into history. A group of politicians under the auspices of the All Politicians Summit convened a meeting in 1997 to discuss the way out of what was fast becoming a festering dictatorship.

That meeting, led by Dr. Alex Ekwueme was brutally dispersed by the security apparatus of the Sani Abacha’s regime. Dr. Ekwueme undeterred by the brutish antics of the regime continued rallying key political figures of different ideological persuasions under a new platform called Institute of civil society.

In the midst of all this confusion, a group of political leaders, eighteen of them in the first instance and later thirty-four decided to “dare the lion in his den”. This group known as the G-34 later formed the nucleus and rallying point of the associations that formed what is today, the Peoples Democratic Party, PDP.

Some of the founders of PDP are now in other parties,Why did they leave? So from history,Obasanjo was brought in as a tenant and he eventually became a landlord. Now the tension moved to the issue of Automatic ticket for the then serving senators before they could vote for Jonathan, which automatically they were delegates.

Then Babanga Tukur was the National Chairman, Tukur stood his grounds and decided what he thought was best for the party, but along the line,he was sacked as the National chairman, and later suspended from the party. Hence another level of conspiracy.

Jonathan went ahead with the election and tension mounted, The game changer Ma’azu came on board, the likes of Olusegun Mimiko,brought in their different conspiracy theory to the party, some people believed that Ma’azu came with a Northern agenda to sell out PDP to the highest bidder ,while Mimiko did the theory of the West, as their aggression against Jonathan who released Almustapha from prison, and they never forgave him.

Election came and gone,Jonathan lost to the North. case closed? Now the party again came into another strong conspiracy,Ma’azu was sacked,Uche secondu came onboard, stayed for a while, then came the Controversial Modu sheriff.

The coming of sheriff is a very complicated one, as it is unknown the conspiracy theory that brought him,though it is rumored that the APC is behind sheriff and all his atrocities in the party. was APC the one that made sheriff the National Chairman? At what point did this conspiracy started?

The party has come under attack,Governor Fayose,Governor wike,senator Akpabio were said to had engineered the emergence of sheriff. what informed their decision? Who and who did they consult before bringing in sheriff?

When was sheriff’s tenure officially supposed to end before his sack? The sacking of sheriff came,a committee was set up in port Harcourt to hold a convention . The case between sheriff and the chairman of the committee disrupted the August convention, and at the time,some elders of the party had regroup to hold Parallel convention in Abuja, in the eyes of everybody, on the same day with the Port Harcourt convention, propounding a theory that all is not well in the party.

Was this Abuja convention another factor that further deepen the party crisis?
The different convention came and gone,with Port Harcourt convention and Abuja reconciling, while Sheriff and makarif remain in court. To what what extent should a party issue be a court affair?
Tukur,ma’azu,Nwodo,o­thers were sacked at one point or the other, and little or nothing is heard of them. what is sheriff’s interest in PDP?

The elders of the party for one reasons or the other have sold or abandon the party. Can PDP be one again? Will the name PDP be changed? So many questions to ask,and not enough answers will be given.

Talking about the party coming back as one with Sheriff as the chairman,it may not likely,but the name PDP may remain. Take for instance,Governor Okorocha of Imo State , took his faction of APGA and joined with APC to form a merger,while Governor Obiano of Anambra remains in APGA and they still relate. If Sheriff eventually wins at the supreme court,some states or persons who wants to remain with him will still be in PDP,while those who won’t will have to consider a mega party.

This is the reality. And whatever happens,Sherif,Conspiracy,the PDP may still go on.

© forwarded by Abasiubong Tom, an analyst and a social commentator …