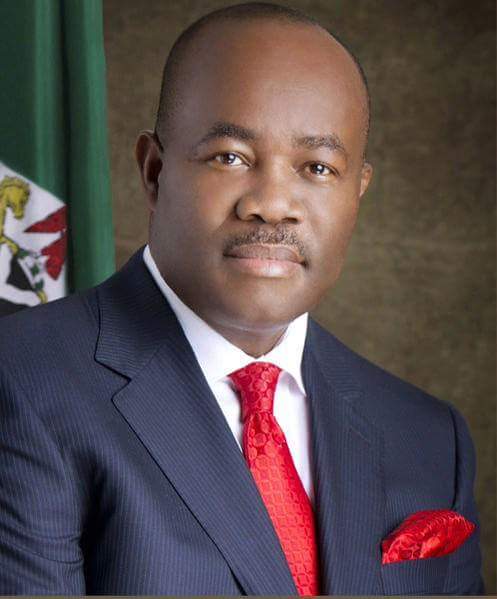 His Excellency, Senator Godswill Akpabio; the Senate Minority Leader of the Senate

A good leader has an exemplary character. It is of utmost importance that a leader is trustworthy to lead others.
A leader needs to be trusted and be known to live his life with honesty and integrity. A good leader walks his talk and in doing so earns the right to have responsibility for others.
True authority radiates from respect for the good character and trustworthiness of the person who leads. A good leader is enthusiastic about his work or cause and also about his role as a leader. People will respond more to a person of passion and dedication.
A leaders needs to be able to be a source of inspiration, and be a motivator towards the required action or cause.
Although the responsibilities and roles of a leader may be different, a leader needs to be seen to be part of the team working towards a goal.
This kind of leader will not be afraid to roll up his sleeves and get dirty. A good leader is confident. In order to lead and set direction a leader needs to appear confident as a person and in the leadership roles. Such a person inspires confidence in others and draws out the trust and best efforts of his team to complete the task well.
A leader who conveys confidence towards a proposed objective inspires the best effort from team members.
A leader also needs to function in an orderly and purposeful manner in situations of uncertainty. People look up to the leader during times of uncertainty and unfamiliarity and find reassurance and security when the leader ‘emits’ confidence and a positive demeanour.
Good leaders are tolerant of ambiguity and remain calm, composed and steadfast to the main purpose.
Storms, emotions, and crises come and go and a good leader takes these as part of the journey and keeps a cool head.
A good leader, as well as keeping the main goal in focus, is able to think analytically. Not only does a good leader view a situation as a whole, but is able to break it down into sub parts for closer inspection. While keeping the goal in view, a good leader can break it down into manageable steps and makes progress towards it.
A good leader is committed to excellence. Second best does not lead to success. A good leader not only maintains high standards, but also is proactive in raising the bar in order to achieve excellence in all areas.
A good leader whether he naturally possess these qualities will be diligent to consistently develop and strengthen them in his leadership roles.
These characteristics of good leadership are what make  Senator Akpabio the best during his days as governor in Nigeria ,in terms of performance, association, prudence management of the State resources, high visions that have turned around the economy of the Akwa Ibom State and endear him to the masses.
Leadership can therefore be described as ‘a virtue by means of which one is able to inspire a group of individuals into working progressively towards achieving a common goal’.
The Ghanaian-American economist, George Ayittey, once told the world that Africa is poor not because of the oppressive and unjust colonial past, but because of the oppressive and selfish policies of native autocrats. In 2012, this idea saw a revision.

Profesoor Ayittey observed that there were two kinds of leaders in modern Africa and called these two groups Cheetahs and Hippos. The Hippos represent the past and often want to maintain the status quo. The former represent new and young dynamic rulers who are angry with the corruption and oppressions of the past.
They are now in charge of running the government and they see themselves in their positions as being given opportunities to develop their land and people.
The Cheetahs are taking an active role in economic and human development and are making a clean break from the past. And Godswill Akpabio is such crop  of leaders , who develops their land and the people.
It is not therefore an accident that some have begun to study this uncommon transformation and have given it the name Akpabioism.
The overarching question in this area, therefore, is this: How could this leadership style be duplicated throughout the continent? How could we use some of the Ideas of Godswill Akpabio and change lives elsewhere in the continent?

With hardship and difficulties occasioned by poor leadership throughout our continent, this is more than an academic question.
We in Akwa Ibom have the opportunity to rise up above the devastations of the past. We have the opportunity to tell the rest of the world that we will no longer buy the patronage, fatalism, and lies that kept us down.
The man, Godwill Obot Akpabio has elevated himself above the peripheral considerations of the Nigerian leadership profiles and by so doing become a shining example to other leaders across the country.
One fact has been clear, and that is the fact that other leaders across the country have been forced by his performance and the uncommon transformation he has brought to bear in the business of Akwa Ibom State to recognize him and this is why his colleagues in the red chambers made  him a first timer  the  minority leader  of the senates.
And nothing wins more honour for a leader like having his opponents say positive things about his performances. And Akpabio has had a lot disciples from other parties sing his praises.
From north to south leaders from opposition parties have voiced Akpabio’s dependability and have all affirmed that he had the capacity to speak and go for others, no matter the tribe or tongue.
People often point to Nehemiah as being a model for leadership.
So a study of Nehemiah focuses on the virtues of Nehemiah and his style of leadership.
When Nehemiah heard about the conditions in Jerusalem for example, he was broken hearted, he fasted, cried and prayed. I wonder how many leaders can be so broken hearted today about the story of destruction, suffering and despair going on in Nigeria and Akwa Ibom State, when national impunity is also ruining the country’s wealth, when terrorism as currently witnessed has taken over the Northern Nigeria, killing the poor masses, when many other vices are pulling down the economy. The change Nigerians was promised have now left them in chains of poverty .
I wonder if any of us could love a people or group so much that we could be broken hearted for their misery, suffering, vulnerability .
This is where Senator Godswill Akpabio fits into Nehemiah’s mould. When he took over the leadership of Akwa Ibom State he promised to pursue development with anger; that the suffering of the citizens of the state was grieving his spirit.
He sighted how the people who have taken to house maid and gate men in other States were being turned to slaves and sex slaves, the deplorable state of the economy of the state and infrastructures. He said lack of Education was the key factor responsible for that and had there and then declared free ,qualitative ,compulsory Education from primary to secondary schools, and provided scholarship for State indigenes in tertiary institutions to study professional courses both at home and abroad.
You might look at Akpabio and wonder why God would ever choose someone like him to reveal His greatness. In the light of all the mistakes he may have made and all the weaknesses you see in him, why would God ever think he could be like Him?

You look at him outwardly but God looks at his heart and knows that he is a good vessel that will fit His purpose in salvaging His generation , for the Lord has embedded in him virtues needed in the transformation of Akwa Ibom State, Nigeria and Africa.
The rough path Akpabio takes leads to his destiny. His destiny is the outcome; it’s the end result. It is what God has ordained specifically for him. Path signifies ways in which one takes to reach his destiny in God. It is vital to receive explicit direction from God, so that he will not do any error.

A man once told me that if he goes to heaven and sees his father, he will return back to earth, and then he will know that God is not sincere with his judgment.
What prompted him to say this is the wickedness exhibited by his father before he died. So, in truth, Senator Akpabio justified the  eight years mandate God gave to him to lead his people .
These are few testimonies of his eight years service in Akwa Ibom , Ibom International Air port , Olympic-sized stadium , e-Library , eccentric flyovers, roads construction of over 10,000  kilometres, free education policy, free health care, Ibom Tropicana and Entertainment Centre, the new Government House, the stand alone Governor’s Office and state banquet hall, construction and rehabilitation of over 10,000 classroom blocks across the state, the massive on-going industrialization projects, food sufficiency in the land, security of lives and property , lastly God diverts all natural disasters from the state.
Senator Godswill Akpabio’s name today is phenomenal among the comity of leaders in the world. From Akwa Ibom State, the uncommon transformation story has been heard and witnessed by many.
His enthronement to that exalted office of senates minority leader  was by a consensus decision of  all senators.

The good deeds of a man exalt him and make him an unforgettable hero.

Congratulations , the reformist and transformer