According to the youth leader, Governor Emmanuel’s good governance through his administration’s infrastructural development programmes had positively touched the lives of the people of the state, especially the rural dwellers. 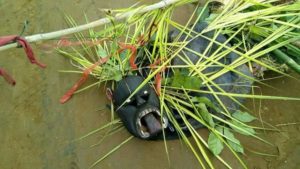 Mr Akpan was speaking when the Akwa Ibom State Government team led by the Commissioner for Works; Mr Ephraim Inyang-Eyen visited the community for inspection and demolition of structures fully compensated to give way for the ongoing 23km Etinan – Eket road handling by a Chinese Construction Company; CCECC.

Speaking on behalf of the youth of the area, Willie Akpan commended the governor “for embarking on the construction of Etinan – Eket road which was ignored by the previous government. 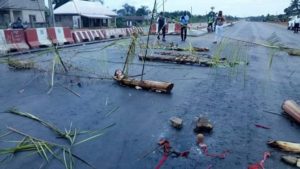 In the exact words of the youth leader; “It is a thing of joy worthy of commendation that His Excellency, Deacon Udom Gabriel Emmanuel, has found it important to remember the users of this very important road. This village (Okon Eket) is the gateway to almost all the oil companies operating in our State and one can only imagine the boost that economic and commercial activities will have once this road is completed”, he said.

Mr Akpan, however added: “We wish to promise Your Excellency that the people of this community in particular and other beneficiaries of this road in general are solidly behind him now and come 2019 general elections. There is no vacancy in Akwa Ibom State Government House in 2019”. 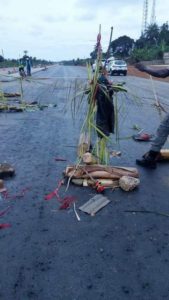 Fielding questions from newsmen at the end of the exercise, Mr Ephraim Inyang-Eyen, decried the ceaseless unsatisfactory attitude of some owners on the Uyo – Ikot Ekpene Road, who refused to vacate their property after receiving full compensations.

“Every structure we took down, owners were given their compensation in full. The understanding some people have is that, it is government money, so they can take it and sit on it. So, how would development take place? “, he asked rhetorically.

Continuing, the Commissioner, flanked by the Permanent Secretary; Elder Effiong Essien as well as some civil and Electrical Engineers from the Works Ministry, noted that, ” His Excellency the governor who want the Uyo Ikot Ekpene Road done, has given us the necessary materials to work with, and a few people would think it should not be done”.

He however appealed to anyone who has a genuine case to visit the Ministry of Works in Uyo and avoid resorting to violence, stating unequivocally that any attempt by an individual or group, to stop development anywhere in the State, would be resisted by the government.

Other projects inspected by the team were; the 29Km Etinan Ndoneyo Road, the remodeling and beautification work at the Eket round-about among others.