…….. stop mocking us by using the story of our missing mother to do propaganda, blackmail and insulting Sen Effiong Bob
…….. Blessing Mbakara want to use my mother and go for house of Assembly.
…….nobody should play politics with my mother.

The uproar that occurred yesterday in Nsit Ubium following the arrest of Hon Blessing Mbakara has gotten deeper as the missing widow’s son Mr
Ezekiel Uboh, invoked the wrath of God on Blessing Mbakara and her supporters, who thought they can play politics on the disappearance of his mother.

He expressed regrets that some people are happy over the disappearance his mother, he discarded the rumor that Sen Effiong Bob is the person behind the her arrest.

Mr Uboh posted this yesterday on his Facebook when the news of her arrest was released and speculated that Sen Effiong Bob is the one sponsoring it.

“Is me EZEKIEL the son of the widow that Lucifer called Blessing Mbakara want to use my motherand go for house of Assembly, God will Punish her and all her supporters, she must give me my mother. Any body that supports Blessing Mbakara will not see good thing in life, she will also go out with your own mother or father or your relation without coming back with them, My God will fight you all for me, make una no mention senator effiong Bob”.

Ezekiel lamented that Blessing Mbakara who came to their house on Sept 2017 and bought her mother out with a piece of wrapper, took her into the bus and until now she is nowhere to be found, he stated that he uploaded the ugly incident on his Facebook page and some human right groups indicated interest to assist him know the whereabout of his mother, he confirmed that the arrest has nothing to do with senator Effiong Bob or the son.

“Leave Sen Effiong Bob out of the arrest of Hon Blessing Mbakara….
Joel Josy, Kanny Okoko and ors should stop mocking us by using the story of our missing mother to do propaganda, blackmail and insulting Sen Effiong Bob.
If it were to be your mother, you would have done more than that.
After taking my mother, we approached her for her to tell us were she kept our mother, instead of saying an encouraging words, she took me to police station and gave the police 10000 to detain and beat me, I was beaten like a common criminal.
When I uploaded the story on my former Facebook account, some human right defender across the nation called and I told them everything that happened, they promised to assist me.”

“It is not senator Effiong Bob that arrested Blessing Mbakara but her arrest came through my cry and tears, as my mother was the only source of our survival, we are 6 in number.
Nobody should play politics with my mother.
Or the God of justice will not spare anybody who tries to joke with the our moment of pains”.

Similarly a ward chairman in Nsit Ubium who do not want his name on print debunked the report that the political leader of Nsit Ubium is causing uproar, according to him, he described Sen Effiong Bob as one of the best politician that Nsit Ubium has, he said that the way Blessing Mbakara is playing her politics is so childish, he confirmed that Otobong Effiong Bob was endorsed by the majority and his endorsement still stand. 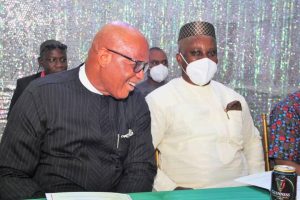