Nigeria may not achieve efficient power supply in the next 5 to 10 years if foreign participation is not allowed in the sector.

The Akwa Ibom State Governor, Mr Udom Emanuel stated this while receiving on a courtesy visit The Senate and House of Representatives Committees on Power at Government House, Uyo.

The Governor who encouraged the Federal Government to let go power distribution suggested that the central government should rather seek revenue from the sector through tax.

Governor Emmanuel insisted that people must be allowed to invest in power and identified transparent legislation as one of the major factors that can motivate Investors to plunge money into the sector and advised the National Assembly members to consider action in that direction.

The Governor told his guests who were accompanied by representatives of Port Harcourt Electricity Distribution Company(PHEDC) and other stakeholders in the power sector that Ibom Power, owned by the state, generates 153 megawatts but has the challenge of evacuation due to problems with Transmission lines.

Mr Emmanuel said regulators in the sector were owing Akwa Ibom Government over 17 billion naira in addition to the Gas given by the state to the national grid and enlisted the assistance of the National Assembly in recovering the money.

He advised those saddled with leadership responsibilities against playing politics with development issues while assuring that the state will devise means of securing critical infrastructure from vandals. 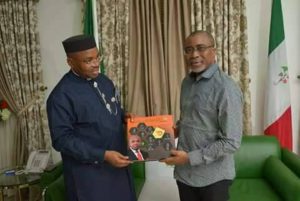 The State Chief Executive bemoaned a situation where Nigeria still grabbles with problems of electricity, water, roads and other social amenities stating that it is the responsibility of Nigerians to find solutions to the country’s problems.

He acknowledged support from PHEDC in the midst of very stringent and challenging business environment and noted that but not for the recession, a whole lot would have been done.

The Governor who expressed appreciation to the National Assembly for the support so far enjoyed said more were still being expected from them.

The Chairman, Senate Committee on Power, Senator Enyinnaya Abaribe said they were in the state to participate in a 2 day National Power Safety Summit and noted that they had fruitful deliberations and also appreciated the Governor for supporting the event.

He announced the willingness of his colleagues to support Governor Emmanuel’s efforts through necessary legislation and other constitutional means adding that, “We have seen that your commitment to the welfare of your citizens is exemplary. We want to encourage other Governors to do likewise”.

He made a case for the Akwa Ibom House of Assembly to assist with Legislations against theft of power, diversion of meter and vandalism of critical power infrastructure.

The National Assembly man applauded the Governor for ensuring superb infrastructure and acknowledged the peaceful and hospitable disposition of the host state.

While fielding questions from journalists, the Managing Director of 4Power Consortium ltd, owners of PHEDC, Engineer Matthew Edevbie said the inability to have round the clock power supply from the Four Lanes Substation had nothing to do with the station and the lines but on what he called the Source.

He lamented the high rate of transformer vandalism and called for timely payment of electricity tariff adding that the Substation at Four Lanes was built to demonstrate their capacity to provide 24 hours power supply.

He also warned against destruction of power infrastructure in the state.

Also speaking, the Chairman, Ibom Power Company, Engr. Etido Inyang described the National Power Summit in Uyo as a welcome development that provides the needed opportunities for stakeholders to share ideas on safety measures, review the past and suggest the way forward.

He said Ibom Power had not recorded any injury or fatality since the commencement of operation but complained of repeated challenges with distribution of power generated by the Company.

Engr Inyang assured the public that the moment Transmission Company of Nigeria takes up its responsibility effectively, people will enjoy 24 hours Power Supply from the Injection Substation.