Building good legacies has been identified as fundamental to the promotion and sustainability of the development of any community. 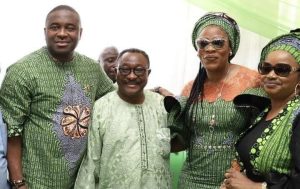 Senator Albert in a message of condolence to the bereaved family lauded the virtues of the departed matriarch, whom he described as a community leader of repute and an advocate of peace and development.

He urged the people of the community to draw lessons from the life and times of Ambassador Udofot and replicate the same in their daily engagements to positively stimulate the consciousness of others towards contributing meaningfully to the growth of the society.

Known for her dexterity and love for academic inclination, Mrs Udofot cofounded a secondary school in the Ikot Eba community which has over decades produced leaders in all fronts of life, businessmen and women of repute as well as captains of industries.

She was aged 90 and mother to a revered business mogul, Obong Imo Udofot of Udofot Petroleum.