The State Publicity Secretary of the Peoples Democratic Party; Comrade Ini Ememobong has sponsored five able and vibrant youths of his Community; Use Ndon in Ibiono Ibom L.G.A on Furniture Making at Ephra-Wood Company, Uyo.

Recall that Mr Ememobong made a promise during the Commissioning Ceremony of the Ultramodern Town Hall in Use Ndon early this year that, he has instructed that five interested persons be selected to be trained on Furniture Making and woodworks in order to give them a secure economic foundation for the future. 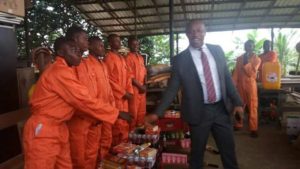 On Monday the carefully selected youths were inducted into the training billed to last for three years. At the Orientation programme held at the company’s workshop, behind AKBC, Ntak Inyang, Comrade Ememobong congratulated the selected youths for being the torch bearers of their community.

He carged them to make the most of the experience,conscious that the skills to be acquired by them was very relevant to every economy and therefore capable of making them millionaires. He also advised them to hold onto God during the training period because there is no enduring attainment that can be achieved without God.

Furthermore, the PDP Spokesman described them as the Future of Use Ndon because the opportunity offered them must affect their community positively.

Finally, he admonished them not to forget where they came from but remain good ambassadors of Use Ndon Community. He likewise charged them to be respectful, obedient,focus, hardworking and attentive during this period of training . He promised to be visiting them regularly in order to monitor their progress at training and welfare.

In a separate remarks, the CEO of the Company; Mr Ephraim James Akpan thanked God Almighty for touching the lives of the inductees through Comrade Ini Ememobong and commended the Sponsor for such a kind gesture and show of humanitarian services. He also admonished the inductees to remain abiding to the rules and regulations of the company while they focus and pay utmost attention to their tutors during this period of training.

In a response, Mr Edikan Johnson who spoke on behalf of the Trainees expressed their sincere gratitude to God Almighty for finding them fit to be lifted up and the Sponsor for giving them this golden opportunity to acquire skill that will help them make earns meet in the nearest future. He also thanked the CEO of the Company for accepting to train them while promising to heed to the words of admonishment given to them and do the needful while undergoing the training.

The event had in a attendance a number of Family members, friends and well-wishers of the Trainees who witnessed the induction ceremony. Others were Mr Bassey Essang, Mr Ukeme Utuk, Mr Ita Edet Bassey, Comrade Martins Inyangetoh etc